Dozing off in a meeting? It could be the air.

Greenhouse gases aren't great for us indoors, either. 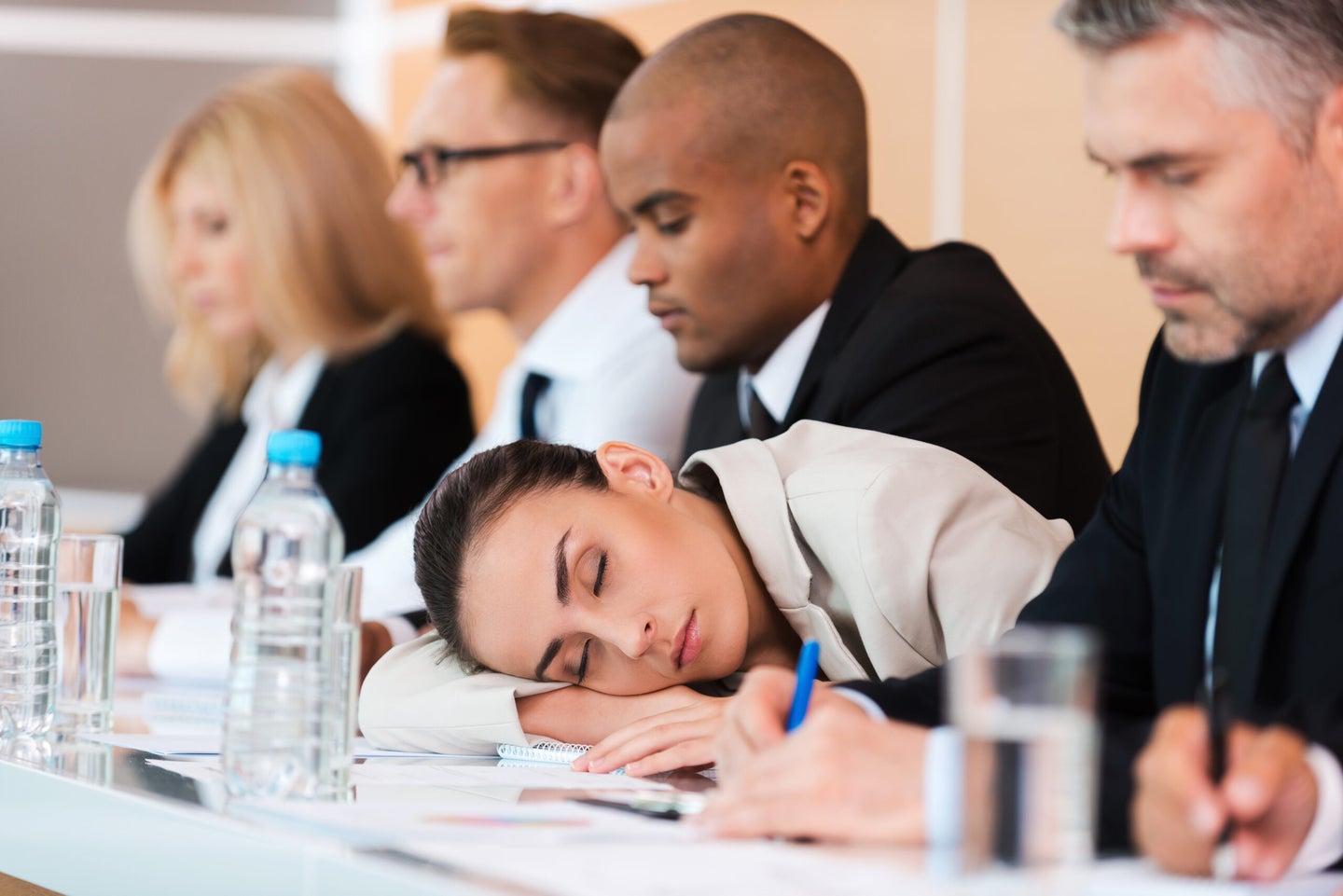 Sleeping at the conference. Tired businesswoman sleeping while sitting at the table with her colleagues.
SHARE

Ever sit in a meeting or lecture wondering why time slows down to an agonizing pace and your eyelids suddenly feel as if they weigh two tons? You’re not alone, and you just might be able to pin your suffering on the 21st Century’s most infamous molecule.

Carbon dioxide, the greenhouse gas we love to hate, doesn’t just wreak havoc on the atmosphere at high concentrations—it’s in the air all around us, even indoors. Because humans exhale CO2, enclosed spaces we occupy tend to have much greater concentrations of the gas than outside. The more people there are per unit of space, the faster the CO2 level in the air within that space will rise. And without proper ventilation, it can reach numbers that would make an atmospheric scientist shudder.

Adam Ginsburg, a research fellow at the National Radio Astronomy Observatory, recorded this process in real time last week at the “Linking the Milky Way and Nearby Galaxies” academic conference in Helsinki. He used a small air quality monitor plugged into his computer to track the CO2 concentration in the conference meeting room and found that it peaked far above the 1000 to 1200 parts per million maximum indoor level recommended by the American Society of Heating, Refrigerating, and Air-Conditioning Engineers.

Ginsburg collected data every day of the conference. He found that the CO2 levels in the room climbed fast soon after speaking events on the second day began. About an hour into the first speaker, they peak at nearly 1700ppm and drop dramatically after the attendees take a coffee break, opening the doors and allowing the room to ventilate. Ginsburg says he alerted conference organizers to the impending carbon catastrophe, after which they made an effort to keep doors and windows open and allow air to circulate. That afternoon, CO2 levels stabilized at around 1000ppm, and remained at a mostly similar level for the rest of the conference (the doors and windows remained open during that time).

When Ginsburg made his data available to other scientists at the conference and on social media, he said a few people commented something to the effect of, “Oh, that explains a lot.” That’s because such high concentrations of carbon dioxide might be making people lethargic and unproductive not just there but in offices and auditoriums around the world.

Effects of ultra-high CO2 concentrations on the body’s physiology are well documented. Because the molecule is acidic, absorbing an excess of it throws off the blood’s pH, resulting in a condition called respiratory acidosis. Acute acidosis (occurring at concentrations of at least 10,000ppm) can cause headaches, confusion, drowsiness, stupor, and even loss of consciousness. But the effects of lower CO2 levels—below the 10,000ppm mark—on the body are less understood, largely because typical indoor levels of carbon dioxide were long thought to be innocuous. However, some evidence suggests it may not be so harmless.

Mark Mendell, an affiliate researcher at the Lawrence Berkeley National Laboratory who has conducted experiments on indoor air quality, says CO2 has historically been a marker for ventilation in buildings—the higher the level, the lower the ventilation and air quality. But the gas itself wasn’t thought to contribute to these problems, until a team Mendell worked with decided to test it.

In a 2012 study, they isolated people in an office-like chamber at three concentrations of CO2: 600ppm, 1,000ppm, and 2,500ppm. Subjects at each concentration completed the Strategic Management Simulation (SMS) test, thought to replicate the complex cognitive functions used in a work environment. They found that the quality of decision-making decreased at 1,000ppm and deteriorated even further at 2,500ppm.

In 2016, a Harvard study found that people performed better on cognitive tests when in a controlled environment with low concentrations of carbon dioxide than conventional, high levels of carbon dioxide. Mendell says this experiment was basically a more complicated version of his team’s study, which made him more confident in their results.

Another said high CO2 concentrations can also lead to sleepiness. And one study on the effects of differing carbon dioxide levels in a flight simulator found that FAA-certified pilots were likely to perform maneuvers better when breathing in lower concentrations of the gas.

While he doesn’t deny the anecdotal evidence of falling asleep in a crowded meeting room, Mendell isn’t quite convinced of the role indoor CO2 plays in the human body given that the scientific literature on the subject is still growing. Further, researchers have yet to identify the underlying mechanism (if there is one). However, these preliminary studies are a good start—all of them tested CO2 only, making it unlikely that the conclusions drawn could be from anything else. Mendell is looking forward to more studies on the physiological effects of the range of carbon dioxide levels found indoors.

“It’s still unclear what the actual story is,” Mendell says.

While Ginsburg’s data from the conference wasn’t a controlled study that isolated carbon dioxide and measured cognitive function, he says he “would certainly assume” that CO2 played a role in its attendees’ experiences. Once the organizers opened doors and windows, Ginsburg says he felt the room become less stuffy.

“The fresh air flowing through certainly felt refreshing,” he says.

It’s unclear how many embarrassing instances of sleeping scientists were avoided by letting the room breathe, but sufficeth to say Ginsburg is an inspiration to bored businesspeople everywhere.

Ginsburg continued to measure CO2 throughout the conference, noting that in times when doors were closed for noise reasons, its levels still spiked—though lower than the initial snoozefest-worthy concentration and closer to the ASHRAE-recommended level. But when studies suggest that psychological changes start occurring at 1000ppm, it’s no wonder why a solution to feeling sluggish can be to go outside and get some fresh(er) air.

Several climate scientists and activists shared the data on Twitter, noting that CO2’s possible effects on our ability to be smart, functional humans could have greater implications as the “fresh air” we often escape to becomes more saturated with the gas. If we do little to mitigate emissions, the IPCC estimates that atmospheric carbon dioxide levels could reach up to 1000ppm by the year 2100—in other words, the outdoors would become as stuffy as an office, driving indoor concentrations to almost unlivable levels. Climate scientist Michael E. Mann pointed out the irony that scientists and policymakers attending most climate conferences likely also experience a CO2-related reduction in cognitive function, which can lead to a vicious cycle of bad policy and even more greenhouse gas emissions. Science historian Naomi Oreskes summed it up: