China Wants To Be First To Land On Lunar Far Side

See you on the dark side of the moon 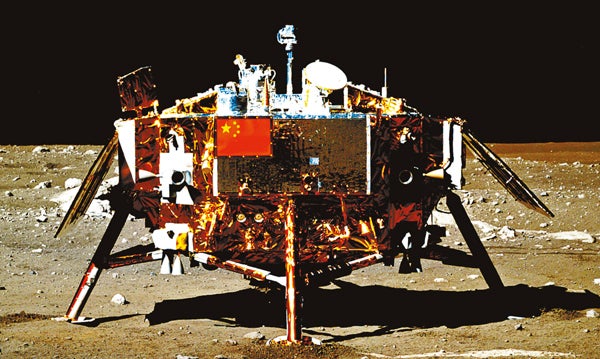 The Chang'e 4 spacecraft, destined for the far side of the moon, is similar in design to the first Chinese spacecraft to land on the moon (shown here). China National Space Administration
SHARE

Only three countries have ever landed spacecraft on the moon: the U.S., Russia, and, in 2013, China. Now China’s planning to land where no human or human-built spacecraft has ever landed before: on the far side of the moon.

The unmanned Chang’e 4 mission, which China plans to launch by 2020, would study the geology of the “dark” side, perhaps shedding light on questions such as: Why does the far side have fewer dark spots than the near side? And does the far side contain high enough concentrations of helium-3 (a potential energy source) to set up a mine there?

The main challenge of landing on the moon’s backside has always been that the moon itself would block the spacecraft’s communications with Earth, potentially putting it at risk.

However, China could pretty easily solve this problem by putting another spacecraft into lunar orbit to relay signals between the lander and Earth—just like NASA has done with the Curiosity rover on Mars.

“The Chinese space program has demonstrated that they can land on the moon and build communications satellites,” astronomer Michael Brown told Al Jazeera, “so their goal to land on the far side of the moon by 2020 is certainly feasible.”