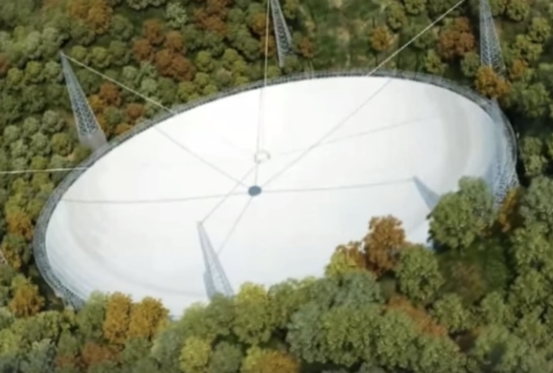 The Chinese Academy of Science finished up its 500-meter radio telescope. It will be open for use in two to three years, and may be used to continue studying gravitational waves... and maybe even find extraterrestrial life. 9,000 people were displaced to build the telescope. CCTV video
SHARE

Five years, $180 million, and 500 meters after starting, the Chinese Academy of Sciences put the final panel into place on its massive radio telescope this weekend.

This completed construction on the “Five-hundred-meter Aperture Spherical Telescope” (FAST) in southwest China’s Guizhou Province, making it the largest radio telescope of its kind. The telescope is expected to begin operations in September, but it’ll be two or three years before it’s open for scientists worldwide.

They hope to study gravitational waves and “boost the global hunt for extraterrestrial life,” said Zheng Xiaonian, deputy head of the National Astronomical Observation, according to Xinhua.

“FAST’s potential to discover an alien civilization will be 5 to 10 times that of current equipment, as it can see farther and darker planets,” said the director of the NAO Radio Astronomy Technology Laboratory, Peng Bo. It’s another step in China’s efforts to become a space power, along with work on a space station and powerful spy satellite.

More than 9,000 area residents were displaced to make room for the giant piece of equipment. The local news outlet put a cheerful spin on their displacement: “Residents were moved away to towns in 2009, where they enjoy better living standards. Villagers in nearby communities admired their luck, saying they should ‘thank the aliens.'”