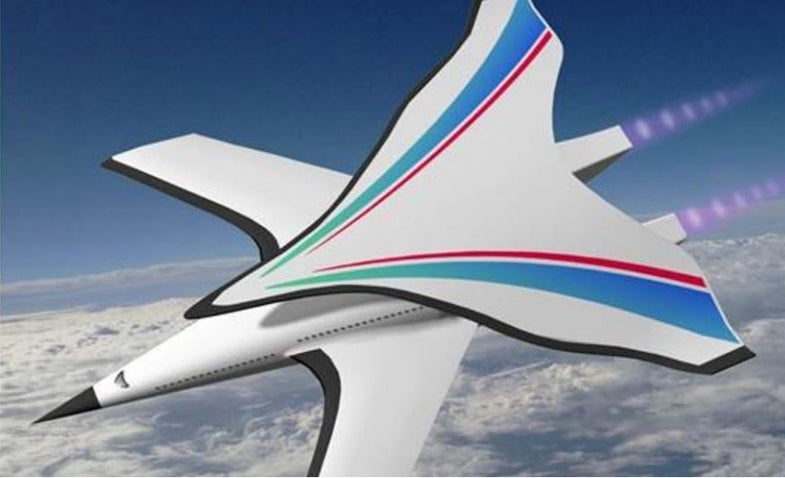 The hypersonic I Plane has a unique biplane configuration to increase its payload and reduce drag. China Science Press
SHARE

A team of researchers at the Chinese Academy of Sciences have tested a hypersonic plane in a wind tunnel to speeds of Mach 7, or 5,600 miles per hour, according a paper published (PDF) in the Chinese journal Physics, Mechanics and Astronomy.

The project is led by Cui Kai, who’s part of the Key Laboratory of High Temperature Gas Dynamics at the Chinese Academy of Sciences, though the plane is likely a biproduct of research from other Chinese hypersonic programs, too, including those with military ties.

This reported breakthrough comes hot on the heels of other Chinese hypersonic successes, including China’s DF-17 HGV as well as various scramjet test flights and rocket-powered spaceplanes.

The test adds teeth to U.S. Admiral Harry Harris’s warning to Congress that China is looking to lead the global hypersonic arms race. Hypersonic vehicles are considered potential strategic game-changers. The speed would allow for greater global reach, but also could nullify current air defenses. For his part, Cui touted the project’s peaceful uses, remarking in his article that it could fly from Beijing to New York in two hours. 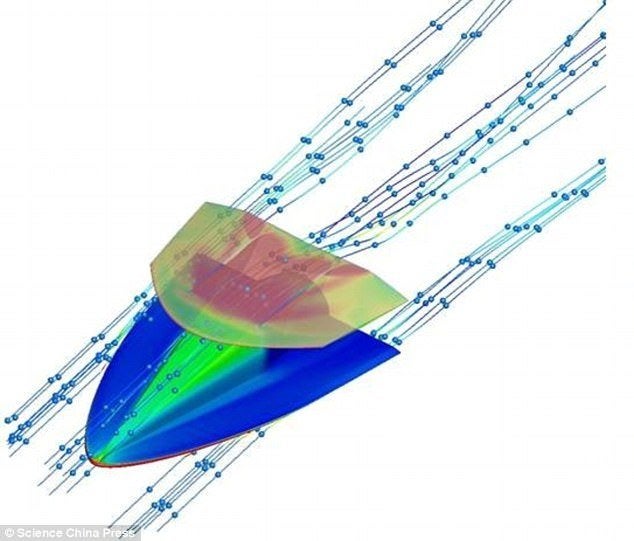 The I Plane, shown here in a graphic illustrating wind tunnel tests, can reportedly disrupt the sonic booms that would otherwise drag and tumble it during hypersonic flight.

The I Plane (named for its frontal resemblance to the capital letter “I”) has one pair of forward swept wings on its fuselage center line as well as a pair of joined, swept delta wings mounted on top of the rear fuselage (like a giant T tail). This provides increased lift compared to more spartan, single-wing hypersonic plane designs like the Lockheed Martin SR-72 and CASIC Tengyun. That extra lift increases the I Plane’s payload-to-takeoff-weight ratio, though the increased weight of the bonus wings would likely require more powerful low-speed engines. The I Plane’s wings are positioned so that the shockwaves from sonic booms (which can cause turbulence and drag) are redirected to improve flight performance and stability.

The I Plane, if it ever proceeds to test flights, will likely be powered with a combined-cycle engine that uses turbofans for low speeds before switching scramjets for hypersonic flight. Its large payload could enable it to act as the first stage of a reusable space launch system, and in hypersonic flight it could carry and release rockets into the stratosphere.

In the South China Morning Post, another Chinese military hypersonic scientist (who “declined to be named because of the sensitivity of the subject”) congratulated Cui’s team on succeeding with such a “crazy design.” More ominously, he remarked that the I Plane could become a “heavy hypersonic bomber” and that it was only one out of a large family of Chinese hypersonic planes.

As further proof of China’s high-speed ambitions, the Key Laboratory of High Temperature Gas Dynamics has another hypersonic breakthrough in the works: a record-breaking wind tunnel that will reportedly begin operations in 2020. It’s designed to produce speeds of up to Mach 36, making it the world’s most powerful wind tunnel, overtaking the Mach 30 LENX-X facility in Buffalo, New York. For reference, a Mach 36 aircraft would fly from China to California in just 14 minutes.

The wind tunnel will also be large enough to hold aircraft models with a wingspan of 3 meters (the world’s largest current hypersonic wind tunnel, China’s JF-12, has a 2.5-meter diameter). What’s more, the ability of Chinese wind tunnel objects to withstand the high temperatures generated by Mach 36 winds would imply significant Chinese advances in temperature-resistant materials for hypersonic aircraft.

China’s hypersonic programs indicate the nation’s getting serious about extending its economic and military reach. In addition to conventional instruments of global military power like aircraft carriers, it has invested in revolutionary technology like quantum communications, exascale supercomputers, and hypersonic aircraft that could reach any point on Earth in a couple hours.