We all know that one of the biggest obstacles to electric car adoption is the long, often overnight recharge time.... 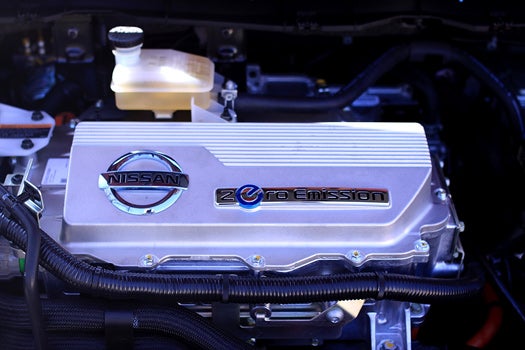 We all know that one of the biggest obstacles to electric car adoption is the long, often overnight recharge time. But Nissan claims that they’ve created a new charging system that’ll fill up your car (Nissan would undoubtedly prefer to say “your Leaf“) in only ten minutes–not much different than a regular trip to the Earth-killing pump.

AFP reports that Nissan, working with Japan’s Kansai University, has come up with a breakthrough in electric charging tech. Details are scarce at best–Nissan isn’t clarifying anything to reporters–but here’s what’s been reported: “The breakthrough reportedly came by changing the electrode inside a capacitor from carbon to tungsten oxide and vanadium oxide to improve power.”

There’s a lot missing from that, obviously. Something may have gotten fouled up in translation–we suspect they meant “battery” rather than “capacitor”–but what it sounds like is that Nissan has come up with a new battery tech that uses tungsten oxide and vanadium oxide rather than carbon. The general bottleneck in reducing charging time isn’t in the charger or the amount of power that can be pumped into batteries, but rather in the frailty of the batteries themselves–the cells can’t handle too much current at once. So a new battery technology that can cope with a very high amount of energy without degradation could conceivable allow that kind of super-fast charging.

But with details this scant, and a note that the tech could take “a decade” to make its way to consumers, we’re not going to claim this is any kind of magic pill for the electric car industry. Still, it certainly seems to be positive movement towards faster charging–there’s no doubt that a ten-minute charge time would do an awful lot to endear electric cars to consumers.