Carmakers have spent the past few years aggressively downsizing engines throughout their lineups to meet increasingly tight fuel-economy regulations. But... 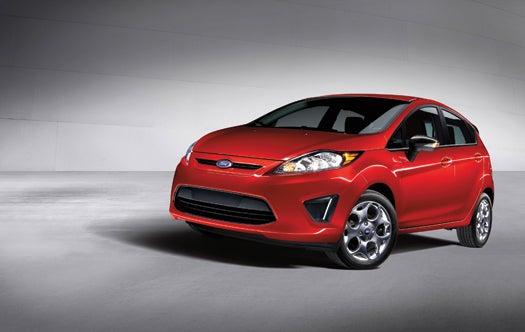 Carmakers have spent the past few years aggressively downsizing engines throughout their lineups to meet increasingly tight fuel-economy regulations. But with the sole exception of the three-cylinder Smart Fortwo, four cylinders is as low as carmakers have expected Americans to go. Three-cylinders are common in Europe but have been scorned in the U.S., where they’re tainted by association with claptrap cars like the mousy Geo Metro. Now, with fuel-economy standards set to rise as high as 56.2 mph by 2025, Ford is planning to bring the three-cylinder to the American mainstream.

Ford’s 1.0-liter engine,the latest in the company’s cylinder slashing EcoBoost series, will be smaller than the average Harley motor, but with the help of turbocharging and direct injection, it should match the horsepower and torque of a typical 1.6-liter four-cylinder. For an easy comparison, Ford’s 2011 Fiesta hatchback wrings 119 horsepower and 40 highway mpg from its 1.6-liter four-cylinder. Drop a turbocharged 1.0-liter in a similar-size car, and you can expect 45 or 46 mpg—within spitting distance of the most frugal hybrids. Brett Hinds, a Ford engine-design manager, says the forthcoming three-cylinder will produce more than 100 horsepower per liter, blowing past a longtime engine-efficiency benchmark.

Such efficiency is the result of many small technical victories. Unlike conventional engines, the new EcoBoost will use an offset crankshaft, which reduces friction and puts more energy into creating motion and loses less to heat. A split-cooling system warms the engine block quickly, making it easier for the engine to pump cold, thick oil, thereby using 1 to 2 percent less fuel. Higher-quality aluminum alloy in the exhaust manifold helps to trim 11 pounds from the engine. And unlike some three-cylinder engines, which require an energysapping balance shaft to counter shake and rattle, Ford says the EcoBoost is inherently balanced.

Ford has withheld most details, but it has said that the engine will eventually replace four-cylinders in millions of small models around the world. Expect other carmakers to follow suit.