Less Time Stuck in Traffic, Thanks to New MIT Program 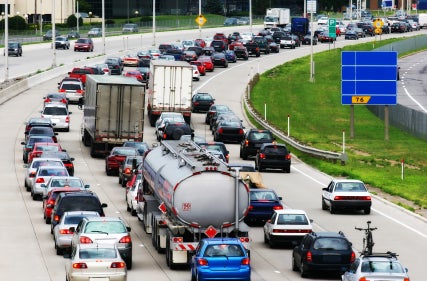 Traffic delays are the bane of any commuter—even those who use a GPS, which warns you about traffic jams on your route to work. The reason: getting real-time data is difficult as the traffic information is routed from the scene to a massive database that only feeds GPS units on regular intervals.

At MIT, a new project called CarTel hopes to solve this dilemma by using in-car sensors that monitor traffic and feed a continually updated stream of data to the CarTel team. In the future, a monitoring system linked directly to vehicles could help find alternate routes without relying on aggregated data from local traffic systems.

“Bulk data typically covers only a small number of road segments, and typically only the major freeways,” says Hari Balakrishnan, an MIT professor in charge of the project. “For example, in Boston, it doesn’t include most roads that people actually drive on.”

Today, CarTel uses sensors installed on about 50 cars in the Boston area. Using local Wi-Fi networks, the data is fed from the cars to an MIT Web server. The driver can monitor traffic levels and choose a different route. Balakrishnan says the project has cut his own commute time by 25 percent. In addition, CarTel can monitor car maintenance issues and alert the driver about any problems, such as much-needed oil change. One key difference between CarTel and a GPS that provides traffic info is that the CarTel data can be used to build traffic models and predict where congestion might occur next.

The plan is to roll out CarTel on a larger scale in more cities, helping reduce fuel consumption and the time people spend in their cars. Ambitious, but it’s hard to see how CarTel could be deployed on a mass scale to all drivers. And, the Dash Express GPS already uses a “social network” paradigm where real-time traffic data is sent from each Dash user, not from city traffic data. Still, anyone aiming to shorten that clench-jawed wait has our support.