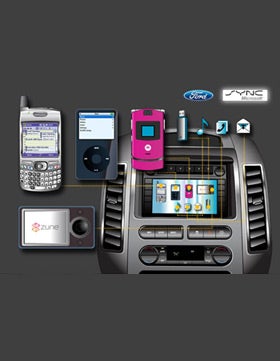 Ford Sync, an in-car entertainment center running Microsoft software, has won praise as the first system to integrate hands-free calling, music playing from MP3 players and voice control of all functions. (PopSci was among the admirers, awarding Sync a Best of What’s New award.)

Despite all its cool functions, Sync doesn’t cost much to build, according to a report today from research firm iSuppli.

Once again, our pals in El Segundo, CA ripped apart a perfectly good gadget to see what makes it tick. The answer: not much.

But do you get what you pay for? One of our editors had a hair-pulling-out experience with a Sync-equipped car last week. Ford insists it was an anomaly, and is sending us a new model to test. Stay tuned for our verdict.

Meanwhile, click ahead to see what components make the Sync work (or not work).

Two chips from Freescale Semiconductor form the $15.80 heart of Sync. A few additional chips and some memory make up the rest. Here are the ingredients:

Freescale MC9S12XDP512: microcontroller that links all the components. $5.00