Slither of Hope: Surgical Snakebots Are Real, And Heading For Humanity’s Orifices

This past Monday, a snake-inspired robot wriggled down the throat of a live human being. Make that two human beings,... 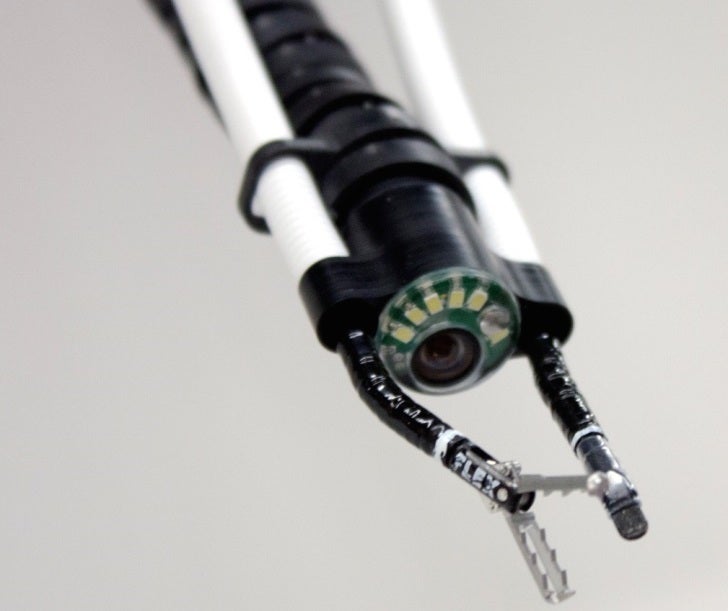 This past Monday, a snake-inspired robot wriggled down the throat of a live human being.

Make that two human beings, operated on during the same day at University Hospital Dinant Godinne in Yvoir, Belgium. The pair of procedures were an important milestone for the Flex system, marking the first time the flexible robot was used on living patients (it had been tested on cadavers last year). It’s also of note to the burgeoning surgical robotics industry, since the Flex is poised to become the first device to directly compete with Intuitive Surgical’s comparatively ubiquitous da Vinci System. While the Flex is still waiting for FDA clearance in the United States, and is currently only intended for head and neck procedures—a fraction of the larger, multi-armed da Vinci’s full range of uses—a showdown appears to be looming. According to Massachusetts-based Medrobotics the snakebot costs significantly less than the da Vinci, and also requires less training time, a smaller footprint within the operating room, and fewer total staff. Unless the FDA finds problems with Flex that European authorities missed, the robot could soon become the only system to encroach on the da Vinci’s territory since it was introduced in 2000.

In the broadest sense, this is almost certainly good news. Competition breeds innovation, and can drive down prices. That second truism could be particularly relevant in this case, since the sole criticisms of the da Vinci system that I’ve heard from the surgeons who use it are related to cost. While many products tend to decrease in price over the course of more than a decade, the da Vinci started at $1.5M, and the latest generation costs more than $2M. With the arrival of Flex, and the recent expiration of Intuitive Surgical’s original exclusive patents, robo-surgeons could become even more common.

Provided, of course, you believe that surgical outcomes really are improved by minimally-invasive robotic procedures (a debate for another time and story). Or, maybe more to the point, that you can stomach the prospect of a snakebot sliding down your own throat to snip and sear at your flesh.

Because if that’s too much to bear, wait till you hear which orifices snakebots might have to wriggle into next, in the pursuit of a surgical revolution.

The thinking behind most Natural Orifice Transluminal Endoscopic Surgery (NOTES) procedures is relatively straightforward. When it’s time to cut into a patient’s abdomen, that incision could be big, as in open surgery, or relatively small, as in laparoscopic surgery. But even with the latter option, and even when a system like the da Vinci is involved, the operation usually calls for multiple punctures. A NOTES procedure, however, drops the number of entry incisions to as little as one, which occurs in tissue that heals more quickly than a hole in the abdominal wall, and leaves no visible scars. NOTES could mean drastically less blood loss, recovery time, and general bodily trauma, because—brace yourself—it enters the patient through the anus, vagina or urethra.

It’s a disturbing visual. Then again, what aspect of general surgery isn’t? And the experimental and limited clinical evidence to date has overwhelmingly supported the proposed benefits of NOTES. Just as minimally-invasive surgery is preferable to the relative carnage of open procedures, NOTES promises a new, reduced degree of damage done to the patient. What’s kept the majority of these transformative procedures out of the operating room isn’t an abundance of squeamishness, but a gap between theory and technology. Existing tools aren’t flexible or nimble enough to accommodate the full spectrum of surgeries.

Cue the snakebots, and the ability to wend their way through a subject’s body. While the da Vinci system’s arms end in dextrous manipulators—they’re “wristed,” meaning they can bend and rotate like human hands—the arms themselves are relatively rigid. NOTES would be out of the question. The Flex system, on the other hand, is composed of a series of flexible linkages which flow along whatever path the surgeon determines, retaining every joystick-proscribed curve and bend in what Medrobotics calls a “follow-the-leader” movement approach. The system is based on the bio-inspired work of Carnegie Mellon University roboticist Howie Choset, who co-founded the company. Choset’s long-term goal is to scale back the amount of surgical skill needed to operate snakebots, by increasing the robots’ autonomy, as well as to finally make NOTES a clinical reality.

From a technical standpoint, surgical snakebots are born to enter orifices. Once inside the body—which would still generally require a small incision—the robot could slither around intervening organs and tissue, en route to its final destination. There, it would do as the current Flex does, using cutting, cauterizing and grasping tools to complete the procedure.

To be perfectly clear, though, Flex is not intended for NOTES. Medrobotics hasn’t asked for FDA approval of anything beyond head and neck procedures, and it’s entirely possible that Flex, specifically, will never venture into the abdomen.

Still, NOTES has always been part of the company’s plans. “We envision our platform being extended to natural orifice procedures in the gut someday, with the promise of offering patients scarless surgery,” says Medrobotics CEO Samuel Straface. “We still need to assess the procedure requirements for this promising surgical field.”

Straface won’t speculate as to when Medrobotics’ snakebots might begin NOTES-related testing. And few medical device-makers want to risk the wrath of the FDA by proposing a timeframe for clearance and deployment. But however long it might take, and whatever the abdomen-exploring snakebot might look like, one else seems to be building the robotic capacity to pull off these kinds of procedures. The technology that Medrobotics pioneered this past week is more than a footnote in the unfolding history of surgical robotics. It’s the best hope yet for an era of surgery that sounds awfully invasive, but that could improve or save the lives of countless, mercifully anesthetized humans.