Tech is for everyone. 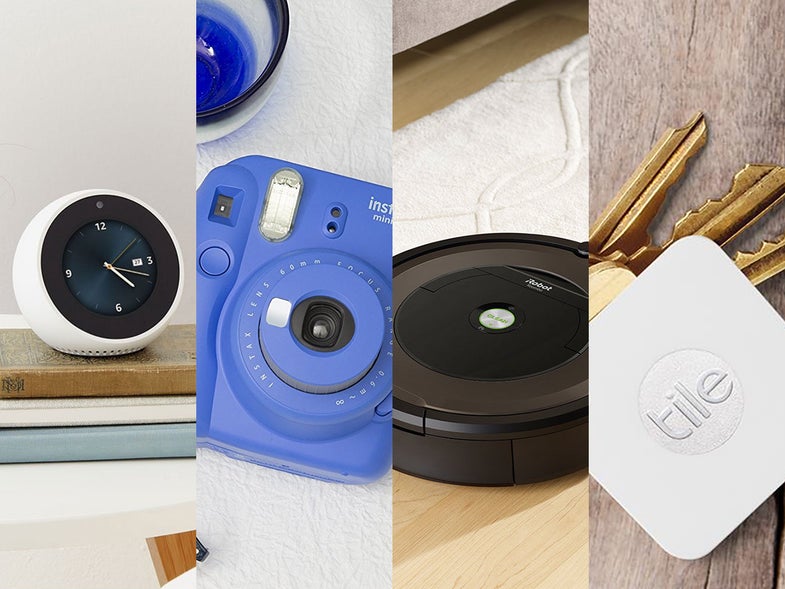 Personal tech has totally transformed how we live our lives—but that doesn’t mean everybody is thrilled about the latest and greatest. You no doubt have a few people in your family or social circle that wouldn’t appreciate a bunch of complicated gadgetry this holiday season. But don’t give up hope. Here we’ve picked great hardware that can suit anyone in your life, no matter their level of technical expertise.

This Echo device is charming-looking, smart, and simple to use. And thanks to the Alexa brains built into the software, it’s improving all the time, too.

The only downside is you can’t actually buy it until December, but you can pre-order it now and have it for Christmas. The smart speaker, video caller, and alarm clock makes a solid gift for someone who doesn’t already have a stack of gadgets at home.

That voice control system pioneered by the Echo means your friend or relative won’t have to fumble around with keyboards, or a mouse, and there’s no complicated setup procedure. As long as they can install the Alexa app on a phone, they can use the Echo Spot.

A Roku Streaming Stick+ plugs right into your TV and is ready to rumble with Netflix, Hulu, Amazon Video, YouTube, HBO, Showtime, ESPN, Spotify, and much more.

Thanks to the chunky, colorful remote that comes with the Streaming Stick+, and the welcoming Roku interface, getting the device up and running should be no problem even for complete beginners—all that’s needed is an HDMI port on the TV. And for you, the gift buyer, the price isn’t too prohibitive.

The teens of today might not realise it, but photography predates the smartphone by more than 150 years, and the Instax Mini 9 would suit anyone who wants to go back to a simpler time of photo taking and processing.

Photographers simply turn the camera on, choose an appropriate scene mode from the dial (like sunshine or indoors), and then hit the shutter button. Pictures pop up instantly from the body of the camera, Polaroid-style, so there’s no need to play around with a phone or laptop to get at the snaps.

You get a close-up lens adapter included with the camera, and it’s available in five bright colors. You might also want to think about bundling some photo paper with your gift.

The beauty of the Tile Mate tracker is that it doesn’t feel much like a gadget. It’s also cheap to pick up, and small enough to fit in a Christmas stocking.

The tracker attaches to your keys, wallet, bag, or anything else you don’t want to lose, and emits a beep when activated from your phone. Your phone can also show the last known location of the Tile Mate on a map.

For waterproof and dustproof Tiles, and a little extra Bluetooth range, you can upgrade to the Style or Sport version, but for most people the standard Tile Mate is good enough.

We’ve talked about giving your non-techie friends or relatives a retro-style camera, and you can do the same with music, by buying a vinyl turntable with a few extra bells and whistles from the digital music age.

The Audio-Technica AT-LP120-USB turntable is one of many record players now on the market that can play LPs as well as connect up to modern equipment. It’s got a built-in preamp, a USB output for recording vinyl on a computer, and the ability to handle 33 1/3, 45, and 78 RPM speeds.

For someone who has yet to embrace apps like Spotify and Apple Music, and certainly doesn’t care much for MP3s, it’s the perfect mix of contemporary and traditional engineering.

The Roomba 890 sits in the middle of the iRobot line, so you can pay more or pay less on a similar device in the series if needed. This model features a triple-clean system, the ability to suck dirt and grime out of carpets and up off hard surfaces, and even advanced sensors that can work out where most of the dirt is and adjust the power accordingly.

Where it really stands out from your average vacuum cleaner is the way it can map out a floor of your home, all on its own, and even go back and recharge itself when needed. A clean can be programmed from the phone app while you’re out at the office.