The backyard griddle is ready to challenge charcoal and gas grills 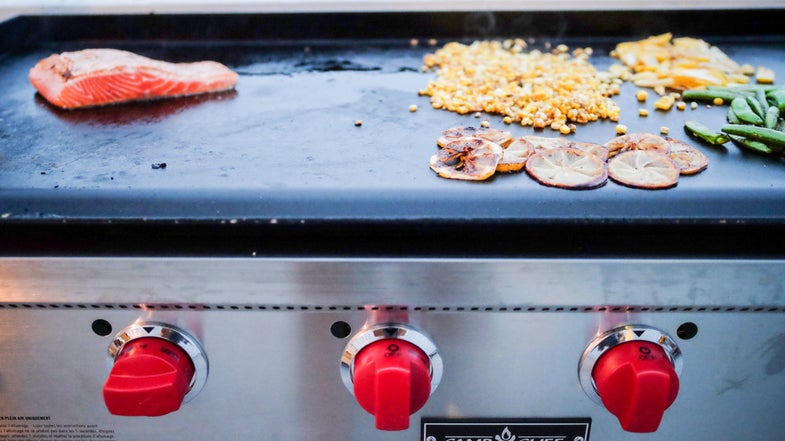 When you go to a BBQ, you usually expect to see one of two types of outdoor cooker: the familiar bowl-o-charcoal, puffing out its cheery cloud of deliciousness. Or the gas grill, practical patron saint of quick-and-easy outdoor fare. This summer, though, maybe you’ve noticed a third candidate vying for the hearts, minds, and meats of backyard wallet-voters: the griddle.

The griddle—or flat-top—is not a fancy piece of equipment, but rather a slab of steel or cast-iron set atop some burners. It’s basically an outdoor short-order-cook station. And the reason you might be seeing them more this year is because people are buying them in unhinged quantities this year. “We have seen over 150% growth in flat top grills sales in 2018 vs 2017,” says Brooks Hansen, a spokesperson for Camp Chef, one of the more popular griddle-makers.

Another popular griddlemaker, which declined to be interviewed on the record, has reportedly seen its sales rise 600% this year. Six. Hundred. Percent.

What’s behind the spike? “I’d probably guess that the uptick in griddle sales correlates with an uptick in smash burgers,” says Kenji Lopez-Alt, internet celebri-chef and smashburger writer-abouter. This riff on a typical beef patty involves packing your ground meat loosely and pressing it—smashing it, if you will—onto the your cooking surface. “Everybody’s writing about smashburgers lately,” says Lopez-Alt, adding that griddles are one of the best ways to cook them. He’s not the only one who thinks that.

“A lot of people have trouble with burgers on a regular grill,” says Meathead, endless pit of expert BBQ knowledge and founder of amazingribs.com. “Burgers break up, they fall through the grates, the flames jump up and scorch ’em—and griddles are just really good at burgers. Especially if you want what I call a ‘diner burger,’ a quarter pounder.” Others call this a smashburger.

The flat-top, however, is not just a meat-crusting machine. “I like to griddle lemons,” says Paul Sidoriak, author of The Flippin’ Awesome Backyard Griddle Cookbook. Yes, this is a real book. “Flat tops are so much fun to cook with and experiment on. One of my favorite dishes is a chop salad ramen stir fry. I make the ramen into this kind of giant cake, let it dehydrate, then add the sturdy vegetables and whatever meat I have left over.” This sounds kind of gross, but also potentially amazing. Try it and if it sucks, just scrape the mess off the flat-top and make pancakes, a safer griddle go-to.

“I use griddles mostly for fish,” says Meathead. “A lot of restaurants serve what they call pan-seared fish; they sear it on both sides, and then finish it in an oven. You can do the same thing on a griddle in one step—just cover the fish and while it’s searing, it’s roasting.”

OK, message delivered: the griddle is versatile, but so is a microwave if all you need is heat. Why is a flat top so good at cooking things? “Griddles work through conductive heat, direct contact,” says Lopez-Alt. “Conductive heat is a very efficient means of energy transfer, especially when you have the right material—like metal.” Energy transfer is a science codeword for delicious crustification, moving heat onto or into your food; and the more metal you have, the better. “It comes downs to mass, really,” continues Lopez-Alt. “If you think of a pan like a bucket that can store energy, a small pan will store a small amount energy; a heavy griddle can store a lot more.

Storing energy is important because you can easily cool your cooking surface down when you put something that’s cold or wet into it. You’re sapping the energy that should be bringing your food up to the temperature where its sugars, fats, and proteins convert into the delicious golden crust that we all love so much. This doesn’t happen when you have a horkin’, hundred-plus-pound piece of cast iron that’s been heating over six burners all morning. “Whether you’re talking about high heat or low heat, you won’t take the temperature down by slapping a cold piece meat on a heavy griddle,” says Lopez-Alt.

So yeah, good for the crust. Another excellent piece of news is griddles tend not to be too expensive. “You can get a flat-top that’s pretty decent for under a hundred bucks,” says Sidoriak, though the $300 range looks like a sweet spot. And if you don’t need something that has its own supply, you can buy a griddle and sit it on top of whatever you use to make fire.

So are you replacing your trusty grill with a griddle? Probably not. But you can buy a griddle that sits on top of your grates for not a lot of money, and that might be a priceless upgrade. If you’re grill-less, though, and you just want a gigantic cast-iron pan that lives outside instead of heating up your house on a hot summer day, maybe think about joining the flat-top herd.