This map shows where the invasive Asian longhorned tick could spread in the U.S.

Find out if it's coming to a neighborhood near you. 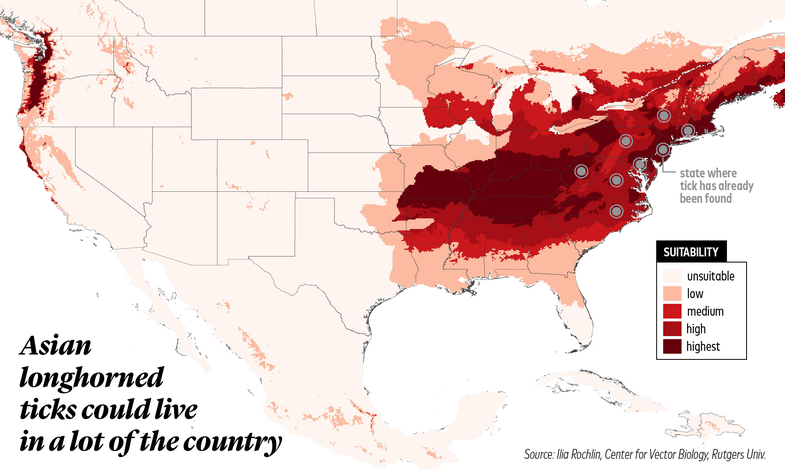 Huge swaths of the U.S. could soon be home to a new kind of tick. Infographic by Sara Chodosh
SHARE

It’s never a good sign when an entomologist says a new species of invasive tick “will be difficult to impossible to eradicate.” The Asian longhorned tick had infiltrated American borders for years before anyone realized it, and will probably continue to spread until it’s just as pervasive as every other disease-bearing vector in this country.

We reported on this problem back in November, when the Centers for Disease Control informed the public that the first invasive tick in 80 years had entered the country undetected at some unknown point. According to the CDC, it’s now definitely present in eight states. Given all this, entomologist Ilia Rochlin decided that “it would be prudent to assess this species’ potential habitat”—and that’s putting it mildly.

See, Asian longhorned ticks are terrifying in a number of ways. One is that they can reproduce without mating, which means a female can make anywhere from one to 2,000 offspring whenever she wants. Another is the intensity with which the insects can swarm on livestock; cows have died of blood loss due to the sheer number of Asian longhorned ticks clustering on their bodies to feed. Yet another troubling quality of the species is that it may be able to carry a virus that’s currently only known to spread by one tick: Heartland virus.

Heartland virus disease is one of those tickborne diseases that causes a generic, albeit intense, form of sickness. People with Heartland have fevers, muscle aches, nausea, diarrhea, headaches, and fatigue, and while that may not sound too terrible, consider that most patients feel bad enough to go to the hospital and get admitted. There’s no treatment for the disease and no known medications capable of preventing it, so all healthcare providers can do is treat the symptoms. Most people recover, but a few have died.

Right now in the U.S., Heartland virus is only confirmed to be carried by the Lone Star tick, which lives up and down the Eastern seaboard and into parts of the Midwest. You may know it as the tick that can cause red meat allergies.

There aren’t many cases per year of Heartland virus disease, but that number may rise if we add another tick to the roster of possible carriers. That is, in part, why Rochlin modeled the areas that could potentially prove habitable for the Asian longhorned tick—to see where we should focus our monitoring and public outreach efforts. He published his results in the Journal of Medical Entomology, and they’re not pretty:

These are the areas with the same temperature, humidity, and precipitation as regions that the tick is known to inhabit in its Native East Asia, as well as those it’s already infiltrated in New Zealand and Australia. In China, Asian longhorned ticks spread a kind of Phlebovirus called severe fever thrombocytopenia syndrome, which can cause multi-organ failure. That virus doesn’t circulate here in the States, but guess what kind of virus the Heartland virus is? You guessed it: it’s a Phlebovirus.

If Asian longhorned ticks are capable of transmitting one Plhebovirus, it’s possible they could become a carrier of another—like Heartland.

Given the fact that we’re already losing the battle against ticks (diseases carried by ticks, mosquitoes, and fleas tripled from 2004 to 2016), it’s not looking good for our war against this new invader. The CDC’s Division of Vector-Borne Diseases has already called for implementing a national system to better monitor and control these pests, though even they note that they’re fighting an uphill battle. Hopefully, Rochlin’s model can help public health agencies direct their efforts to where they’re needed most—because we really, really need them.