Watch A Drone Take Off From Another Drone 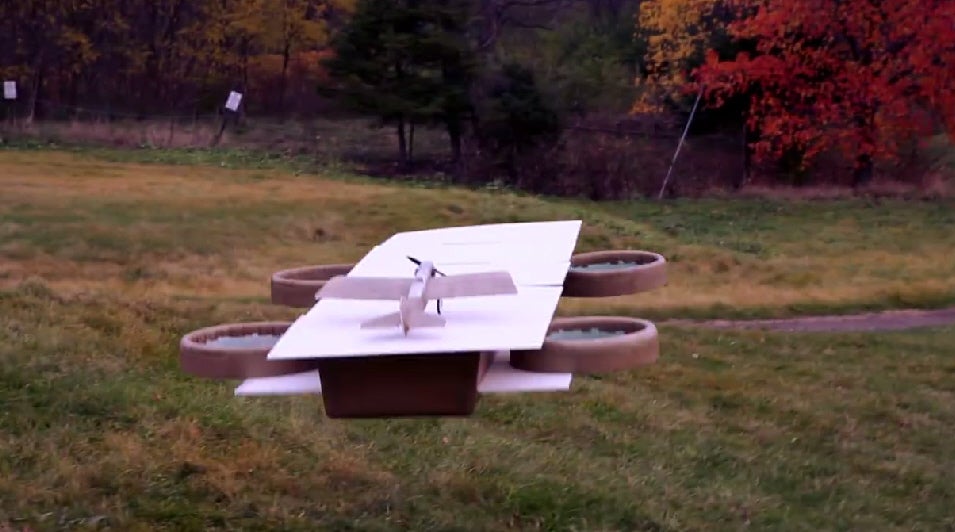 In this video, a drone aircraft carrier takes off into the sky with another drone on top of it. That second, more normal airplane drone, then takes off from a runway that is itself already flying. It’s like something straight out of The Avengers, but instead of a fictional platform costing untold billions of dollars, this is a real thing that someone made and flew in their backyard:

This isn’t the first homemade remote control helicarrier. A hobbyist built one in 2012 but that carrier didn’t also launch drones.

This working model, made by hobbyists at Flite Test, is less stylized but more functional. The carrier looks like a modified quadcopter, with four rotors balanced two to a side along its rectangular length. It hovers a few feet of the ground, before a very small drone takes flight, dipping a little as it falls off the end before flying around towards the camera. It’s a neat feat, and one that’s probably confined to toy robots for now.

What’s the likelihood of a human-sized version? Not great without some kind of major innovation. The energy needs for such a craft are tremendous, requiring the same amount of force as that generated by some 70 Space Shuttle Solid Rocket Boosters to lift it into the air. For now, it seems the Navy is content with floating runways instead of flying ones. And when an idea is so expensive that the Pentagon dismisses it, it’s really too expensive.