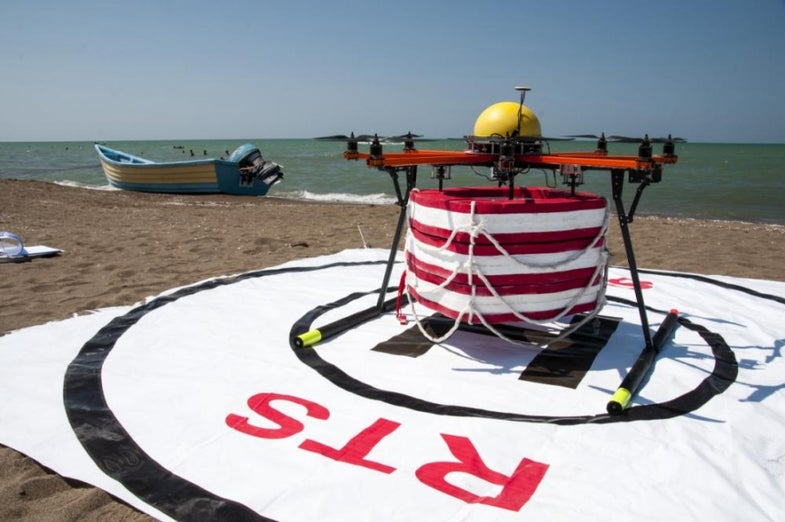 In the not too distant future, swimmers in distress may look up to the sky for help and find, not a lifeguard, but a drone, delivering a life preserver in their moment of need. Designed by Amin Rigi and RTS Labs in Iran, the Pars drone is a robotic lifesaver. First demonstrated in 2013, Rigi is launching an RTS Labs offshoot, RTS London, to mass produce the drones.

Here’s how Popular Science first covered the Pars drone in 2013:

Since then, the drone has undergone a series of tests and improvements, moving from concept to prototype to demonstration. Here’s an early test, using an eight-rotor drone, a single inner tube, and a courtyard:

This next video starts off with animation about the drone concept, before cutting to tests with a working model. In one striking trial, the hexarotor reaches a swimmer in 22 seconds, more than a full minute faster than a lifeguard who started at the same time.

The undersides of the hexarotor arms carry LED lights, so at night swimmers can see the drone coming to save them. The video also gives away an important detail: Pars is still remotely piloted by a human.

Future plans for the drone include floating stations with solar panels where several can recharge simultaneously, as well as more advanced features so drones can save lives on their own. With RTS London launched to manufacture these drones, the beaches of the future might just be safer thanks to some friendly robots.