How It Works: A Pipe-Bot That Seeks Leaks

Drip detection is no longer a pipe dream. 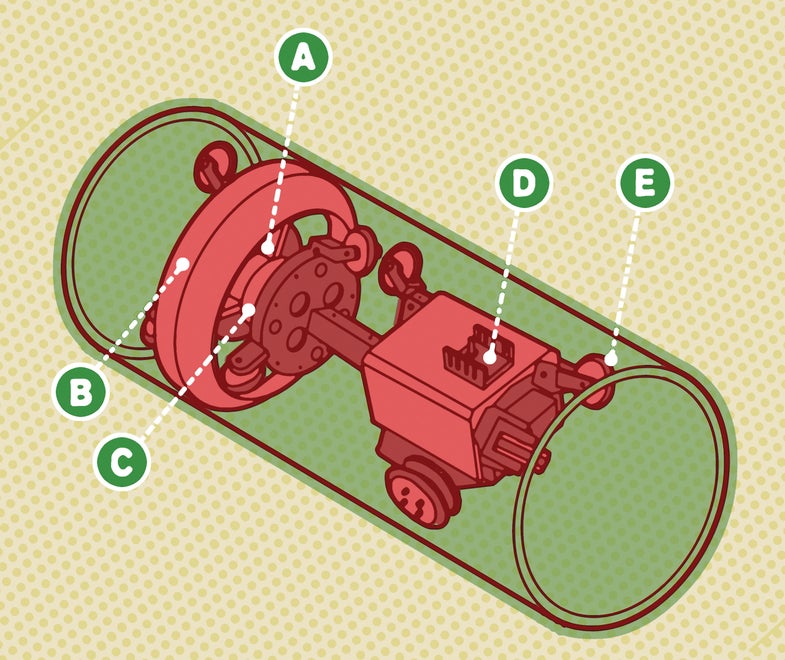 In March, what started as a negligible leak in a gas pipe caused an explosion that leveled two apartment buildings and killed eight people in New York City. Leaky pipes can pose a real danger, but there isn’t an oil, natural gas, or water network in the world that doesn’t have them.

“No matter what type of pipe system you have, leaks go undetected for a long time,” says Kamal Youcef-Toumi, a mechanical engineer at MIT.

Existing acoustic sensors aim to detect leaks from above-ground, but to catch smaller leaks sooner, Youcef-Toumi’s team is designing an autonomous robot to patrol pipes from within. The two-liter-bottle-size prototype cruises through pipes at up to 3 miles per hour in search of subtle pressure differences that indicate a loss of fluids. Then the pipe-bot sends an alert with GPS coordinates to a technician who can locate and repair the leak.

A – A polyurethane membrane detects pressure changes and protects the drum.

B – A 3-D–printed plastic drum moves in response to flow differences from a leak.

C – Force sensors record how much the drum moves to gauge the size of a leak.

D – An onboard computer drives the bot and communicates wirelessly with operators.

This article originally appeared in the November 2014 issue of Popular Science, under the title “A Pipe-Bot to Seek Leaks.”