In principle, robots could run diagnostic tests, clean hospital rooms, and bury the dead. Engineers just need to figure out whether the machines are up to the task. 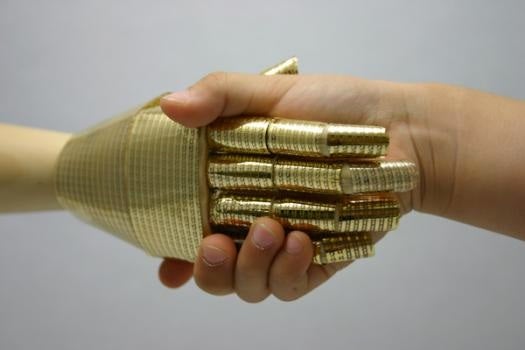 Engineers make disaster-response robots precisely because robots are able to work in situations that are too dangerous for humans. Now the humans have got a new idea: Perhaps robots could carry off waste from Ebola patients, or bury the bodies of people who have died from Ebola in West Africa. Roboticizing such tasks would keep people from having to touch bodies when they’re most infectious.

Working with the White House Office of Science and Technology Policy, robot engineers will meet early next month to talk about whether they could repurpose existing machines for these tasks and more, Computerworld reports. The engineers will talk about how robots can work in both West African clinics and U.S. ones. The proposition faces many challenges, which Computerworld outlines. It may turn out that today’s robots aren’t sophisticated enough to help out in this Ebola outbreak at all—we’ll see.

Of course, some hospitals do have a few simple robots already. There are telepresence robots, which let doctors check on patients from afar. That may be especially helpful for Ebola cases in the U.S., where few physicians have encountered the virus before. In both the U.S. and abroad, telepresence may make isolation and quarantine less lonely, and isolated folks more likely to stick to the rules. Earlier this month, there was a bit of coverage about a hospital “robot” that sends out powerful UV light to decontaminate rooms, although we would call it more of a wheeled machine. It doesn’t move on its own and it doesn’t seem to be able to take very sophisticated commands.

Defense One reports on more complex robots that may work for Ebola aid, including a robot, built for the Tokyo Fire Department in 2008, that’s designed to carry bodies. It’s unclear whether that robot will be useful, however. It depends on whether the friends and family of those who died would feel okay with it handling their loved ones. Engineers attending the workshops in November will focus on listening to what people on the ground say they need, Texas A&M computer scientist Robin Murphy told Computerworld. It sounds like they’ll have a lot to talk about.