What World War II Soldiers’ Dreams Were Made Of

British soldiers who were captured by the Germans during the Battle of France dreamed about lots of food, and not that much violence. 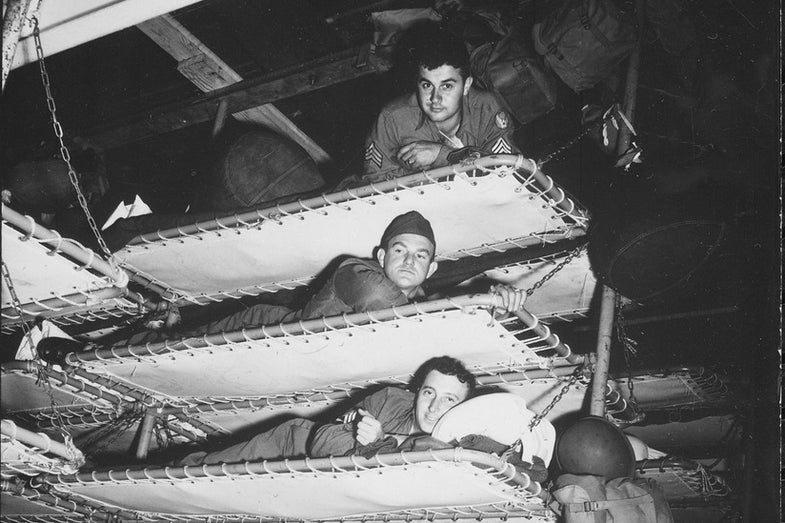 Endless meals. Family. Escape. These were the dreams of 79 British soldiers who were captured in an early World War II battle and imprisoned in Germany, according to the dream journals kept by one of the prisoners. Recently analyzed for the first time by a Harvard psychologist, the journals show a population more influenced by prison life than the traumas of battle.

Maj. Kenneth Hopkins, who even as a prisoner of war was concerned about completing a doctoral dissertation at the University of Birmingham in the U.K., took notes every day about the dreams he and his fellow prisoners experienced. He recorded 640 dreams in six journals, five of which eventually made it to the Wellcome Collection, a London research archive. It was there that Harvard Medical School’s Deirdre Barret, an assistant clinical professor of psychology, (and editor-in-chief of the journal Dreaming) began to delve into the journals.

‘They’re bored to tears and longing to get out, nostalgic for the people back home.’

Barrett found that the soldiers’ dreams more resembled those typically experienced by prisoners, not soldiers in the wake of battle. “I was surprised that they didn’t look more like other wartime trauma populations,” she told the Harvard Gazette. “It was striking that they did have these features you see in prison dreams. … They’re bored to tears and longing to get out, nostalgic for the people back home.”

The soldiers, captured during the Battle of France in 1940, may have only had their first taste of combat before being locked in a converted castle in Laufen, Germany. According to Barrett’s analysis, the dreams tended to feature more men, family, and dead people, and fewer women, friends, and animals than the dreams of the general population. They were also less aggressive and less sexual than is typical, though when the prisoners did dream of violence, it was realistic, extreme violence like the kind they would have experienced on the battlefield.

Here’s an excerpt from one of the journals, quoted by the Gazette:

Hopkins was never able to complete his dissertation. He died of emphysema before the prisoners were released. But his careful notes were forwarded on to his advisor at the University of Birmingham after the war, eventually allowing Barrett to pick up where his scholarship left off.

The study is due to be published in Imagination, Cognition, and Personality. Read more at the Harvard Gazette.