The new dino was five times bigger than local tyrannosaurs and the first to be discovered in Central Asia. 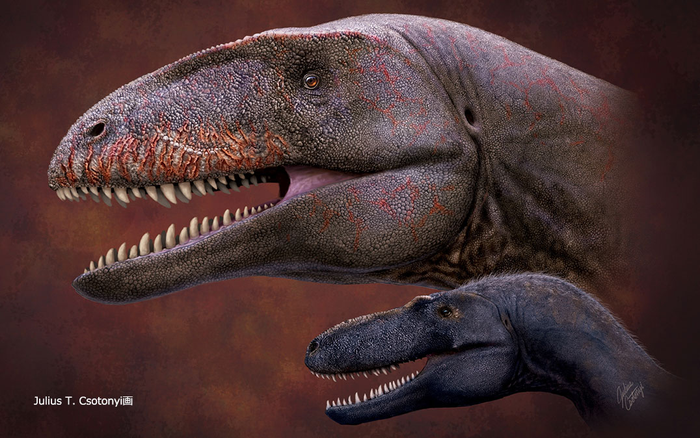 The new dino, at top, far outweighed the tyrannosaur, below, previously thought to be the region's apex predator. University of Tsukuba
SHARE

Rising out from the Kyzylkum Desert of Uzbekistan is the Bissekty Formation, a structure of rock and sediment between 90 and 92 million years old that has preserved many a dinosaur fossil. Out of this formation, paleontologists have discovered an imposing new dinosaur species that was likely the apex predator of the area at the time.

The discovery, Ulughbegsaurus uzbekistanensis, was a carcharodontosaur, or a “shark-toothed” dinosaur, a kind of allosaur characterized by its large size and serrated teeth. It’s the first of its kind to be found in Central Asia. And while paleontologists only had a single fossil to work with—a part of the dino’s upper jaw—researchers have concluded that this specimen likely measured around 26 feet (8 meters) in length and weighed about 2,200 pounds (1,000 kilograms).

Those massive dimensions means that U. uzbekistanensis was twice the length and more than five times heavier than the predator previously thought to be the apex of the area, the tyrannosaur Timurlengia, which measured 13 feet (4 meters) in length and weighed in at 375 pounds (170 kilograms). The findings were published in Royal Society Open Science.

[Related: The real Jurassic Park may have been in the Arctic]

“The skull would have measured about a meter. It had knife-like, sharp teeth and was a meat-eater,” lead researcher of the study, paleontologist Kohei Tanaka, told Express.

University of Minnesota paleontologist Peter Makovicky, who was not involved in the study, agreed with the paper that U. uzbekistanensis was likely at the top of the local food chain. “I think this bone is so big that this would have been a very large predatory dinosaur and very likely the apex predator in its ecosystem,” he told Live Science.

The giant jawbone was found in Uzbekistan in the 1980s, but researchers rediscovered the fossil when looking through the collection of an Uzbekistan museum. Senior author and Hokkaido University Museum paleontologist Yoshitsugu Kobayashi explained in a statement the value of this finding: “The discovery of Ulughbegsaurus uzbekistanensis fills an important gap in the fossil record, revealing that carcharodontosaurians were widespread across the continent from Europe to East Asia.”

The study authors also write that, sometime before the Late Cretaceous period (between 66 and 100 million years ago), carcharodontosaurians like Ulughbegsaurus disappeared from Central Asia, ceding that top predator spot to tyrannosaurs. But a scarcity in research and fossil discovery means that not a lot is known about this transition. U. uzbekistanensis is now the latest known carcharodontosaur known to coexist with tyrannosaurs in this time period.

“For many tens of millions of years, tyrannosaurs were the understudies of the allosauroids,” University of Edinburgh paleontologist Stephen Brusatte, who was not involved in the new research, told Smithsonian Magazine. “Allosauroid” refers to the larger family that carcharodontosaurians like Ulughbegsaurus belonged to.

Though it’s clear that tyrannosaurs took over the area as carcharodontosaurs disappeared, it’s still unclear why, and new fossils like this can help illuminate the question: “Given that allosauroids were holding back tyrannosaurs for so many tens of millions of years, I can’t envision that tyrannosaurs suddenly figured out how to out-compete [them],” Brusatte said. Having this new fossil, therefore, is a great new piece of the puzzle to have: “This is one new bone, and really just part of a bone, but its importance far eclipses its looks.”