Point this wand at food and it will eventually appear (for a price). 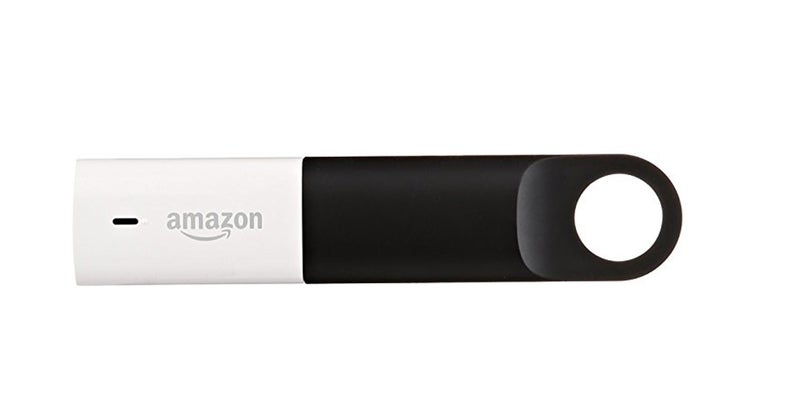 The Dash Wand is basically a food scanner with Alexa built in. Tell her what you want, or physically scan the item you’re about to run out of, and the wand will instantly add it to your Amazon shopping cart. Plus, it’s basically free.

Slide the two included AAA batteries into the back of the Dash Wand, visit an online activation page on your phone, and choose the Wi-Fi network you want to join—that’s really all it takes to start shopping with the Dash Wand. You’ll obviously need to have an Amazon account, too.

We used the Dash Wand as our exclusive food procuring device for a week to see if Alexa could make grocery shopping a more pleasant and efficient experience. One thing is certain: She helped us spend more money on Amazon.

Amazon charges $20 for the Dash Wand, but once you register the scanner you’ll get a $20 credit that instantly shows up on your next purchase. That effectively makes it free as long as you’re an Amazon shopper.

For Amazon, this makes perfect sense. The Dash is yet another way to embed Alexa into people’s homes, even if it’s a less robust version of the personal assistant (more on that below). It also puts a smart grocery scanner in the hands of Amazon shoppers just as the company finalizes its $13.4 billion purchase of Whole Foods. Smart move.

So how does this Alexa-powered food summoner actually perform? For the most part, pretty well. There are two ways to get food into your Amazon cart. You can scan it by pointing the Dash at a barcode, holding down its one button, and then releasing it when you hear a bloop. You can also simply tell Alexa what you want her to add. Of the two, scanning proved to be the most accurate and reliable. The Dash adds produce and other perishables to your AmazonFresh cart (AmazonFresh is an extra $15/month for Prime subscribers, but you get a month free), while other, non-food items are added to your standard check out cart. One nice thing about the Dash is that it’s smart enough to not repeatedly add the same thing to your check out cart if you bungle the scan. It’s not always clear when the Dash has successfully recognized something so this is a nice touch.

If the Dash can’t find an item or recognize a barcode, it lets you know. We found it did have some trouble with rounded or reflective barcodes, like those found on soda cans and bottles, but for the most part everything we scanned, ended up in our cart. One thing to keep in mind: You’ll need to live in an area serviced by AmazonFresh to get produce and other perishables with the Dash Wand. Right now, those areas are limited to Seattle, Northern California, Southern California, New York, and Philadelphia.

Using Alexa to add things was more hit and miss. As far as barking commands, you can be as general or specific as you want to be. You do have the chance to specify brands and varieties (ex: red grapes vs green grapes) in the shopping cart if you just want to be general about it at first (“Alexa, add cereal!”). Still, Alexa doesn’t always get it right. Asking for paper towels added a six pack of Kleenex boxes to our cart for some reason. A can of kidney beans transformed into a can of black beans, too. You can always ask Alexa what’s in the cart to ensure it’s what you think, but we found the discrepancies between requested items and cart items persisted. All of this means you’ll definitely want to visually double check your cart before paying for anything.

Physically, the Dash Wand looks similar to the previous version. It’s about the same length, but comes with a loop at the top (for hanging on an included hook), and also has a magnet inside so that you can stick it directly to your fridge. Given that it runs on two AAA batteries, you won’t get instant, hands-free Alexa, but that’s probably obvious.

As for Alexa, her powers are understandably limited in Dash Wand form. You can still ask her about the news, traffic, and weather, but you cannot use her for voice messages, timers (for some reason), or streaming music (not that you’d want to).

For us, the biggest limitation to the Dash Wand had nothing to do with Alexa or the scanner; It was the lack of variety. Take something like tomatoes. When we checked, you could buy standard beefsteak or vine tomatoes, and that’s it. No Heirloom, no Cherry, no Roma. That’ll change obviously with the Whole Foods acquisition, but for now, it’s annoying. Also annoying? Scanning items you regularly buy only to have Amazon add a ridiculously priced version of that item to your cart. A $5 bottle of dish soap we regularly use showed up in our cart with a price of $18. That’s silly.

Obviously you have to deal with these same issues on Amazon when you’re shopping without a scanner or a voice assistant, but having to double check the price on everything you add to ensure you’re not getting screwed grows tiresome.

All of this made the Dash Wand more suited for basic, non-perishable pantry staples like rice, beans, cereal, and various snacks. It was nice getting to skip our weekly trip the grocery store, but we’ll continue to make it until Amazon fine-tunes its grocery shopping process.

Given the price, it’s hard not to recommend at least giving the Dash Wand a shot if you’re mildly curious. It worked well for us in most cases, but the lack of AmazonFresh choices along with some occasionally outrageous markups means it’ll remain a novelty device until Amazon builds out its grocery offerings.