This 3D Render Of A Paris Apartment Looks Amazingly Real

Sometimes it's the subtle, not the spectacular, that captures the imagination 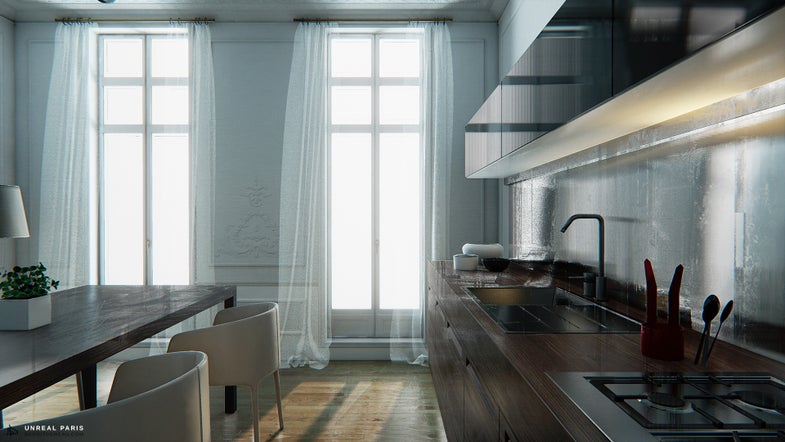 Every time a new action film or animated movie comes out, we marvel at the amazing computer-generated effects. But those effects can be even more impressive on a small, quiet scale. Artist Benoît Dereau has created a 3D walkthrough of a Paris apartment that’s mind-blowing in its sheer attention to detail and subtlety.

I pride myself on being able to tell when something’s the result of computer-generated trickery. But in this case, I found myself leaning in to my computer screen, trying to find the flaws with the 3D-rendered space. More often than not, I come up empty. Sure, the light doesn’t react quite right, and there’s no reflection in the mirrors, but beyond that, the detail in Dereau’s rendering is stunning.

Dereau’s walkthrough is powered by Unreal Engine 4, the latest version of Epic Games’s game engine, which was released at the 2014 Game Developers Conference. While the engine is used for spectacular video games like the upcoming Fable Legends or the latest version of Unreal Tournament, Dereau’s work indicates possible applications for the engine in the realm of architecture, interior design, and even real estate.

Dereau was hosting the actual files on his site for people to download, but it looks as though high demand has required him to remove them for the moment. Personally, though, I’d be fascinated to see how this render would look in a virtual reality headset like the Oculus Rift. (Someone will no doubt make that happen as the Rift does support Unreal Engine 4.) The environment looks impressively real and immersive, more like a photograph than a 3D render. If this is the next generation of computer graphics, sign me up. The holodeck can’t be too far off.