The Top 10 Worst Jobs In Science

These down-and-dirty labors are hard, dangerous, and outright gross—and people love them anyway 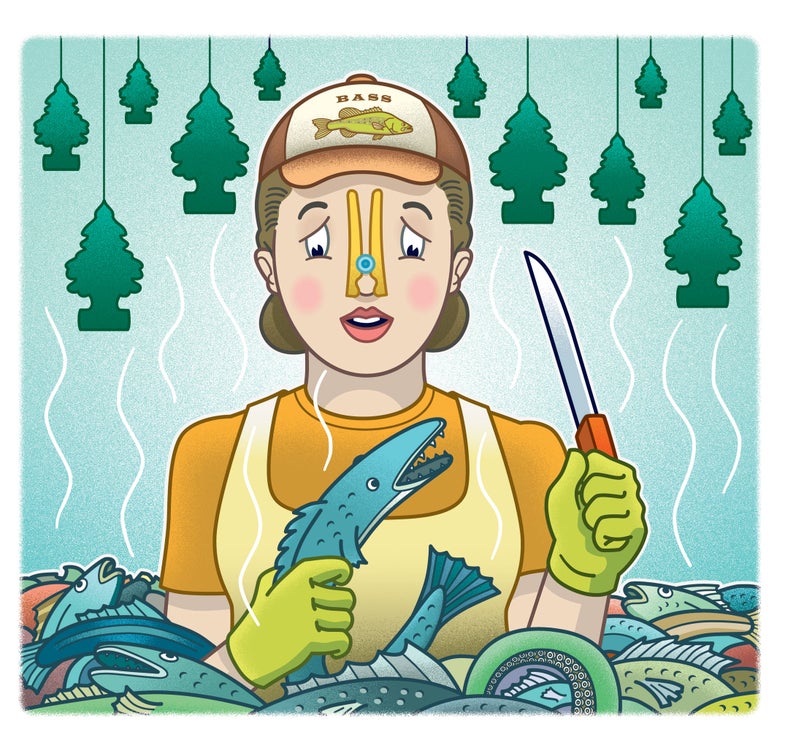 Crisp sea air isn’t a match for the stink of stomach juices and half-digested squid, but marine biologist Michelle Staudinger doesn’t mind. When boats come in from fishing tournaments up and down the East Coast, she’s waiting on the docks, asking anglers to let her clean their catch for free in exchange for the stomach contents. On any given weekend, she says, “I’m usually elbow-deep into one or another of the East Coast’s pelagic fishes. I get a lot of compliments on how fast I can gut a tuna.” At University of Massachusetts Amherst, Staudinger surveys coastal fish and marine mammals to evaluate the predator-prey relationship over time. Besides relying on fishermen to deliver species that live far offshore, she waits for some animals, such as dwarf sperm whales, to wash up dead. She once necropsied a whale that had been shipped on a flatbed truck from Florida to Massachusetts. “Oh, yeah, it’s disgusting,” she says. “But we now have baseline data for looking at how ecology is changing as the impacts of climate change grow.”. Illustration by Peter and Maria Hoey
SHARE

This article was originally published in the February 2015 issue of Popular Science, under the title “The Worst Jobs In Science”.

Check out our other coverage of best/worst jobs in science here. 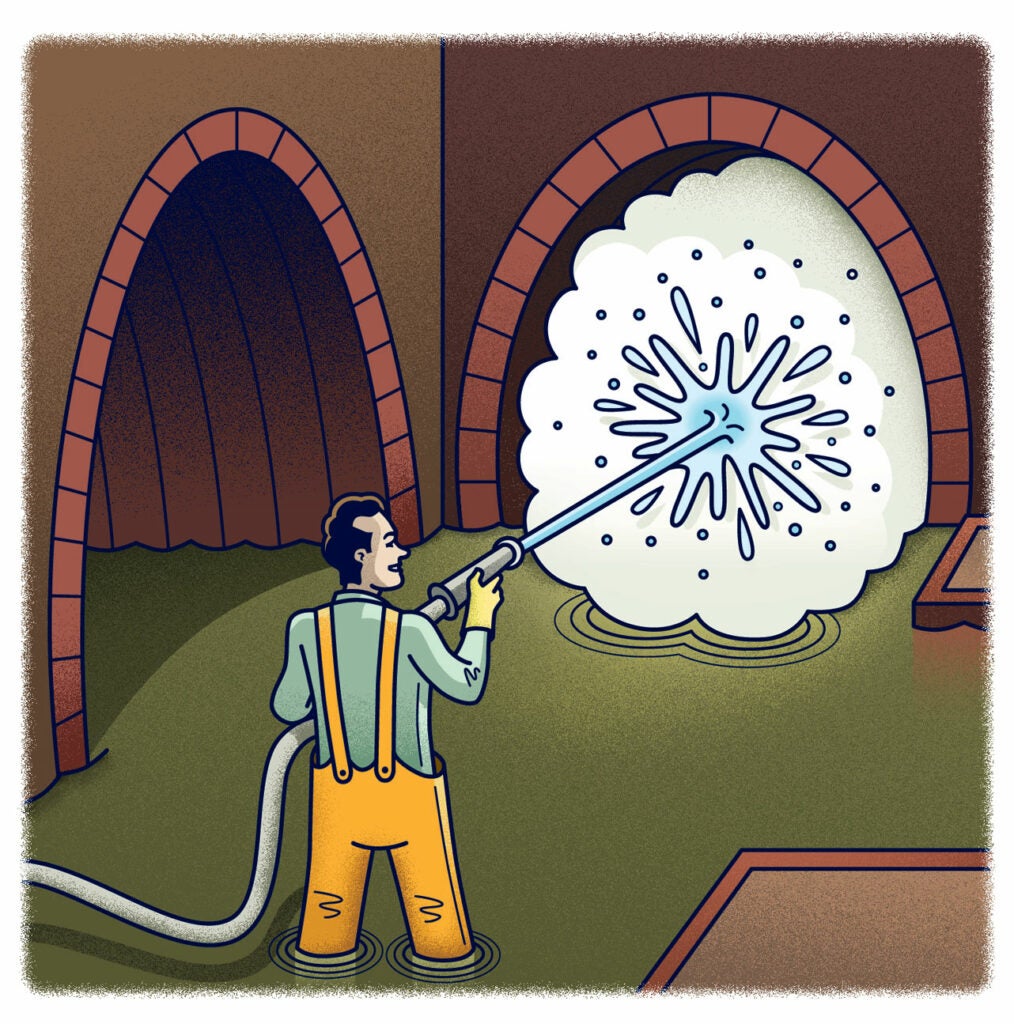 Few people know that the food waste they pour down their drains can turn into fatbergs—hideous, multi-ton globs of coagulated fat that can grow as long as a 747. London’s sewer company deals with 55,000 a year that can obstruct passages and cause flooding. That’s why Dan Brackley leads a team of 38 people to clear bergs with high-pressure water jets, shovels, and a large chainsaw-like machine. The job isn’t just disgusting, it’s also dangerous: “The fatberg eats oxygen out of the air and gives off heat and high levels of methane,” Brackley says. He wears sparkproof tungsten-studded waders, a portable methane and hydrogen sulfide alarm, an emergency rebreather, and a total-body Tyvek suit (fortunately, he’s fallen only once.) Still, he says, “The smell gets into my pores even after two or three showers. You have to rub down with sugar soap.” 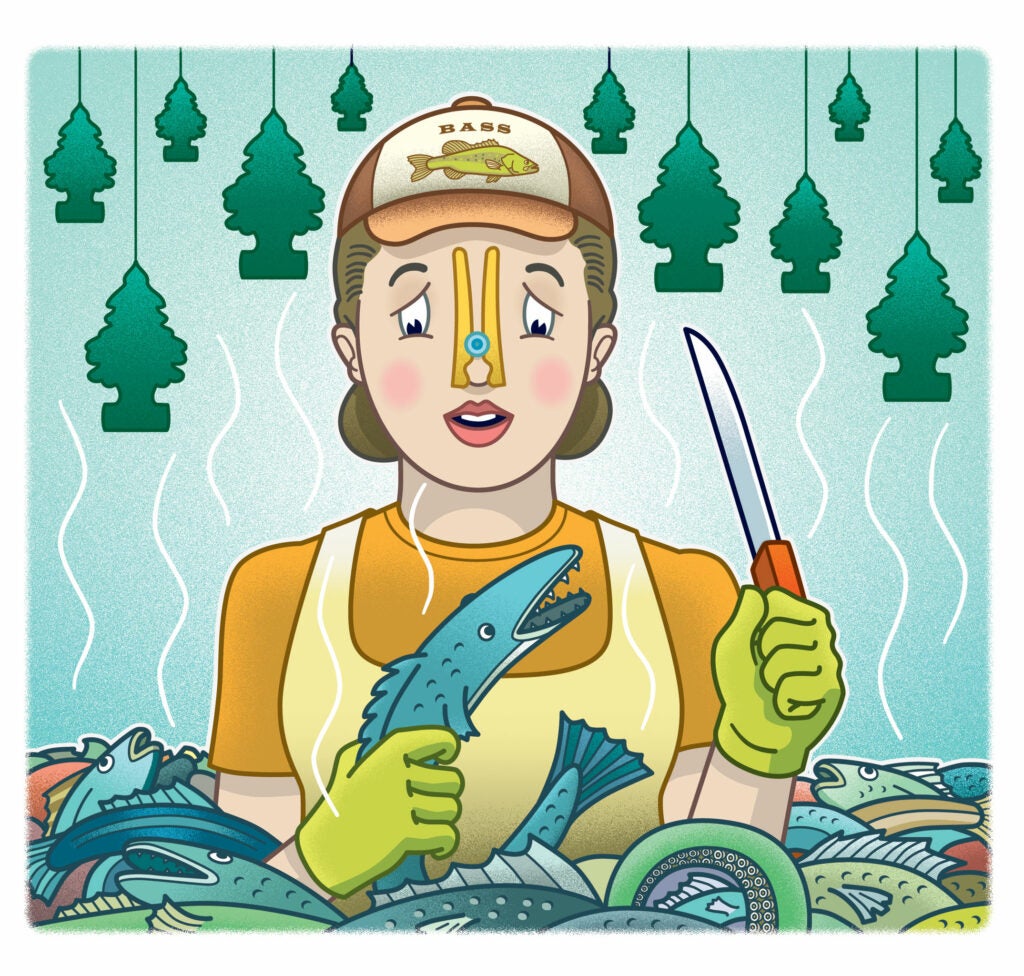 Crisp sea air isn’t a match for the stink of stomach juices and half-digested squid, but marine biologist Michelle Staudinger doesn’t mind. When boats come in from fishing tournaments up and down the East Coast, she’s waiting on the docks, asking anglers to let her clean their catch for free in exchange for the stomach contents. On any given weekend, she says, “I’m usually elbow-deep into one or another of the East Coast’s pelagic fishes. I get a lot of compliments on how fast I can gut a tuna.” At University of Massachusetts Amherst, Staudinger surveys coastal fish and marine mammals to evaluate the predator-prey relationship over time. Besides relying on fishermen to deliver species that live far offshore, she waits for some animals, such as dwarf sperm whales, to wash up dead. She once necropsied a whale that had been shipped on a flatbed truck from Florida to Massachusetts. “Oh, yeah, it’s disgusting,” she says. “But we now have baseline data for looking at how ecology is changing as the impacts of climate change grow.” 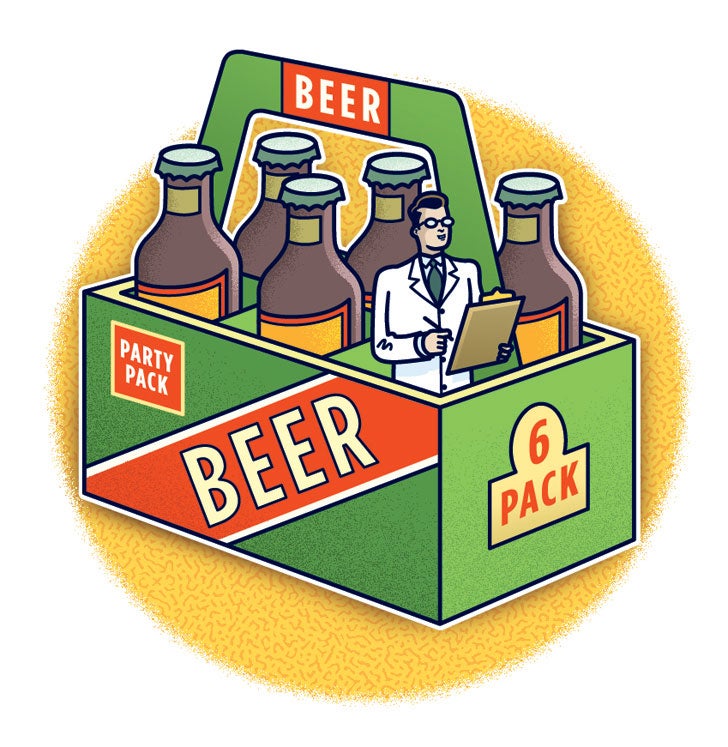 Can people accurately estimate their own blood alcohol level when inebriated? That’s the question Loyola Marymount University researchers set out to answer. To get data, they sent then–psychology student Greg Wisenberg into frat parties and late-night pizza places near various southern California universities. Once there, he had to quiz revelers on their blood alcohol level and actually measure it with a breathalyzer. Not surprisingly, reactions around the kegs were mixed. “People were suspicious,” Wisenberg says. “Like, ‘What are you doing here? Why aren’t you drunk too?’” The results showed that drinkers fall into two groups: Those who were slightly buzzed consistently overestimated their intoxication, while those who were loaded grossly underestimated it. If the researchers can elucidate how partiers perceive inebriation, others could use the information to teach safety and intervention. A noble goal, but cold comfort for Wisenberg, who suffered insults and even half-serious physical threats. To one particularly boisterous group, he had to say, “I’m working now. I’m not going to fight you, but you can take my survey!” 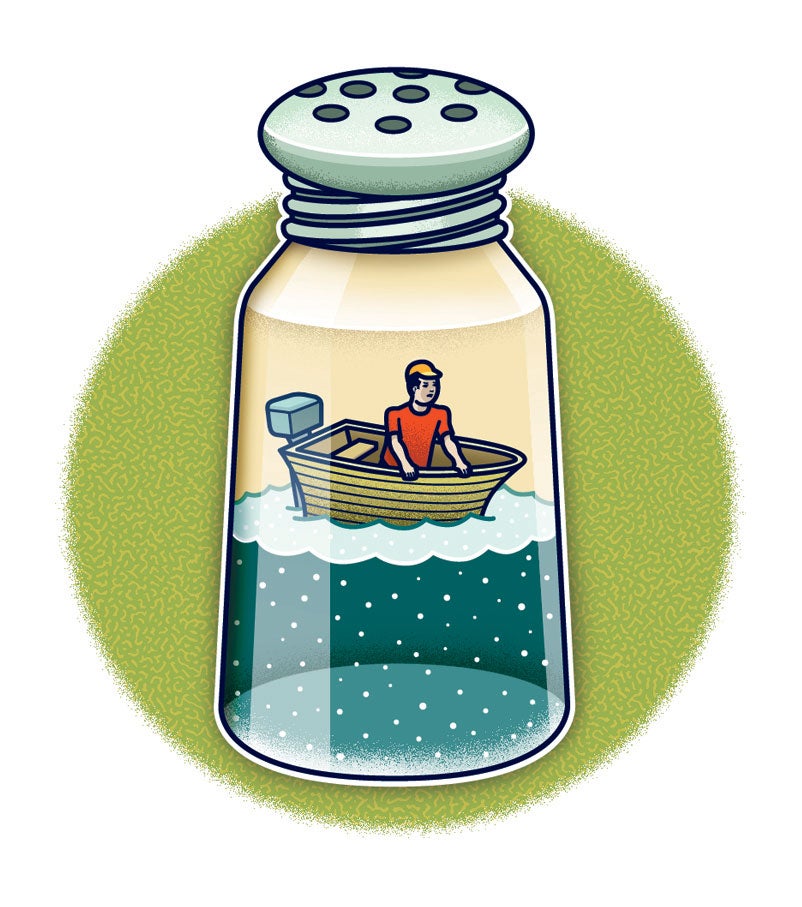 As John Selker began installing sensors in the Dead Sea, a tourist perished after taking a gulp of water. “It turns out the salt is so intensely concentrated that it’s hazardous,” says Selker, a hydrological engineer at Oregon State University. The infamous lake is covered with a thick, highly saline layer of 97°F water, and it’s getting saltier as it evaporates. Selker’s task was to figure out whether the surface exchanges water with the cooler layer far below. He eventually found that it does—information that could be used to better manage the lake. But first he learned a different lesson: Anything left in the Dead Sea eventually grows heavy with salt and sinks. After Selker began deploying more than a million dollars worth of fiber-optic cable, his computer-powered buoy foundered to the bottom. Then his team had to face the treacherous task of recovering it. “I was scared,” he says. “This is a fluid that burns like acid if you get it in your eyes. We had no life preservers, we were standing on little planks over the surface, and a helicopter was flying in to the beach to take away the dead guy.” 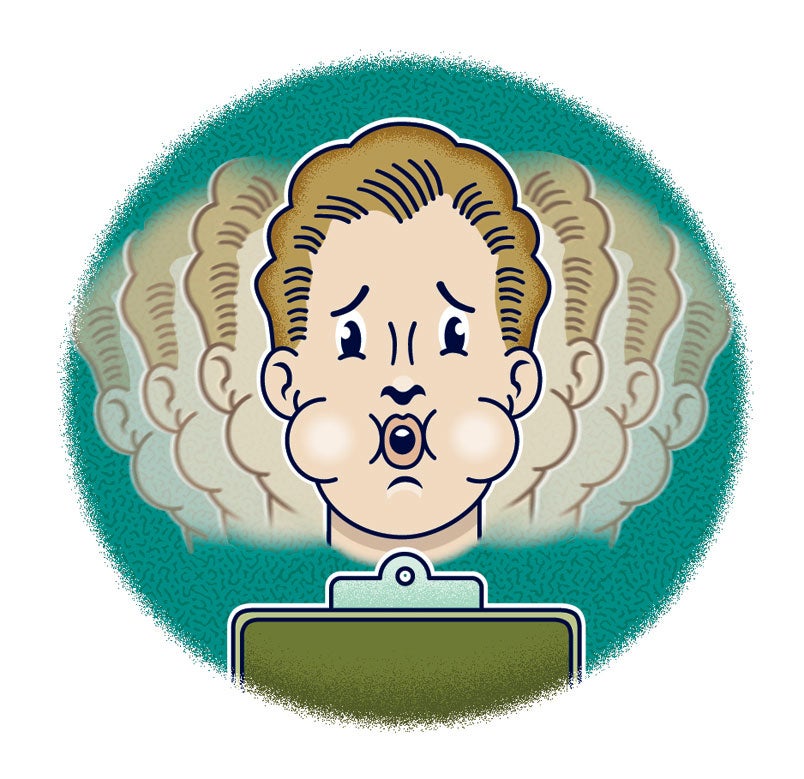 Former Greek Navy officer Panagiotis Matsangas got his Ph.D. in nausea. Now a scientist for the Naval Postgraduate School in Monterey, California, his job is to convince test subjects to sit in a special motorized chair that heaves side to side for an hour, while they try to solve cognitive tests through virtual-reality goggles. “People often don’t want to participate when they learn too much about my studies beforehand,” Matsangas says. Inducing even mild motion sickness, he’s found, causes a person’s multitasking ability and cognitive performance to fall, which could impact everything from Navy staffing policies to ship design. But when Matsangas tries to butter up subjects by explaining the importance of the tests, it doesn’t always work, he says. “Some of them feel really unwell.” 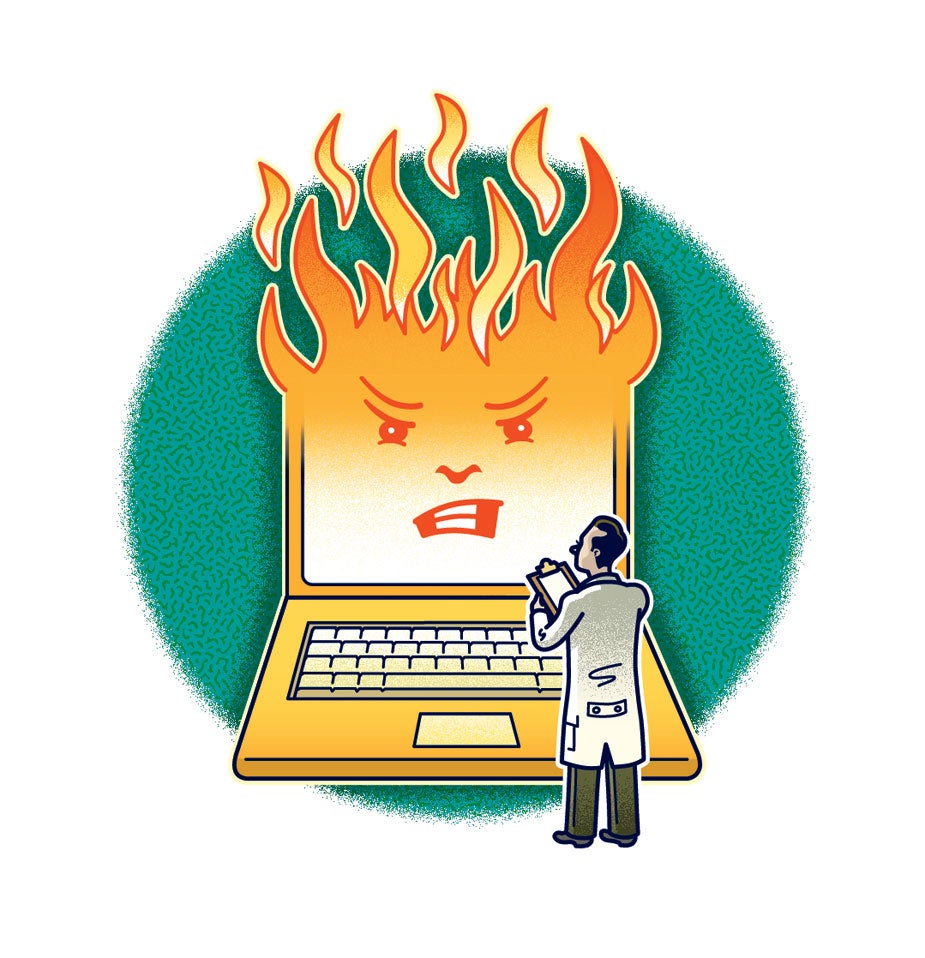 If you’ve ever had a little too much fun editing Wikipedia, you may have been part of information scientist Madelyn Rose Sanfilippo’s research. Whoever changed Grover Cleveland’s page to say he had “mad beat boxing skills” is an example of the light-hearted form of trolling Sanfilippo researches. But her work at Indiana University has also sent Sanfilippo into the ugliest corners of the Internet. People will join memorial pages for the deceased, for example, just to mock the public mourning. “You can’t really sit there and read for extensive periods of time because it becomes overwhelming,” Sanfilippo says. There’s also a professional hazard to maintaining close proximity with trolls, who see an information scientist as bait—she often receives insulting and offensive emails. “It’s mostly poking fun at my credibility as a researcher,” says Sanfilippo. Despite the harassment, she thinks the work is only getting more important. “With trolling’s increasing prevalence,” she says, “it’s important to understand how to mitigate the impacts.” 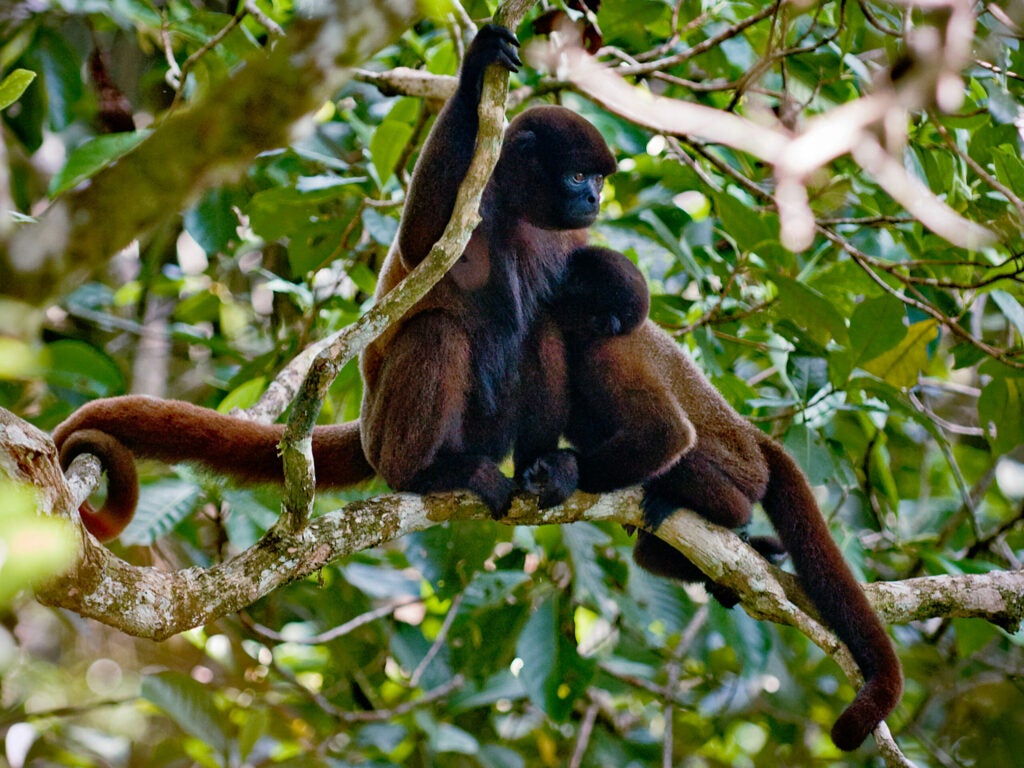 Christopher Schmitt, a primatologist at the University of California, Berkeley, is currently researching the role of genomics in primates’ weight gain. “I was studying wild lowland woolly monkeys in Amazonian Ecuador, and one day I was running in a downpour when I accidentally fell down on a trail and stuck my hand in some jaguar scat. Then I made the mistake of scratching some old tick bites, introducing a type of hookworm. These worms don’t have the enzymes to digest the dermis and enter the bloodstream, so they crawl around under the skin leaving raised trails. They itched so bad, it felt like my bones were on fire. A few weeks later, in an effort to help, a Quechua guide had me grind up leaves, spit in them, and rub the paste on my skin. The next morning, I woke up with black chemical burns all over. Finally, I went five hours by boat and truck to the closest medical facility to get a simple anti-parasitic medicine. But it was worth it. Because of that trip, I was able to publish an important paper about monkeys’ social groupings.” 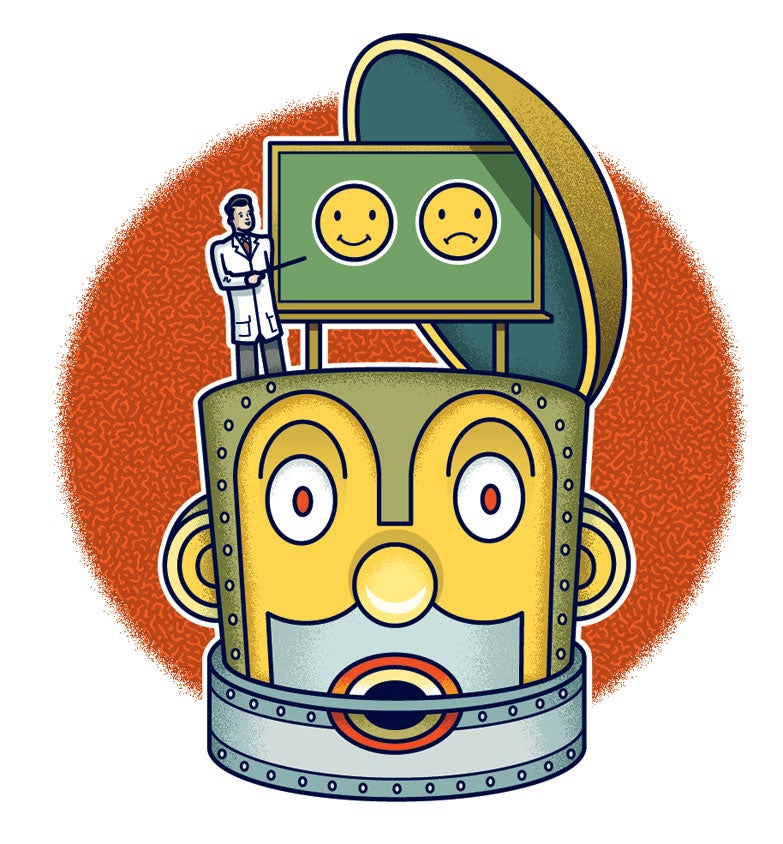 Scientists have long sought to create the ultimate social robot, a personable machine like C-3PO. But for artificial intelligence to react to our emotions, someone’s first got to train bots to recognize them—which is Michel Valstar’s job. A computer scientist at the University of Nottingham in England, Valstar spends his days creating a database of faces showing anger, disgust, fear, and happiness. “Computers are so literal,” he says. “They have to be fed every possible situation and taught the context.” First, Valstar recruits human subjects to make expressions for a camera. To capture real anguish, for example, he asked a group of chronic back pain sufferers to repeatedly perform difficult stretches. Then he annotates the footage, a task that takes several hours per minute of video. “It’s the kind of work that turns you into a zombie,” he says, requiring close attention to detail but promising endless monotony. With the help of buckets of coffee, Valstar has now built a record so comprehensive it will be used in the new field of behaviomedics—training robots to spot changes in patients caused by medical conditions like pain or depression. 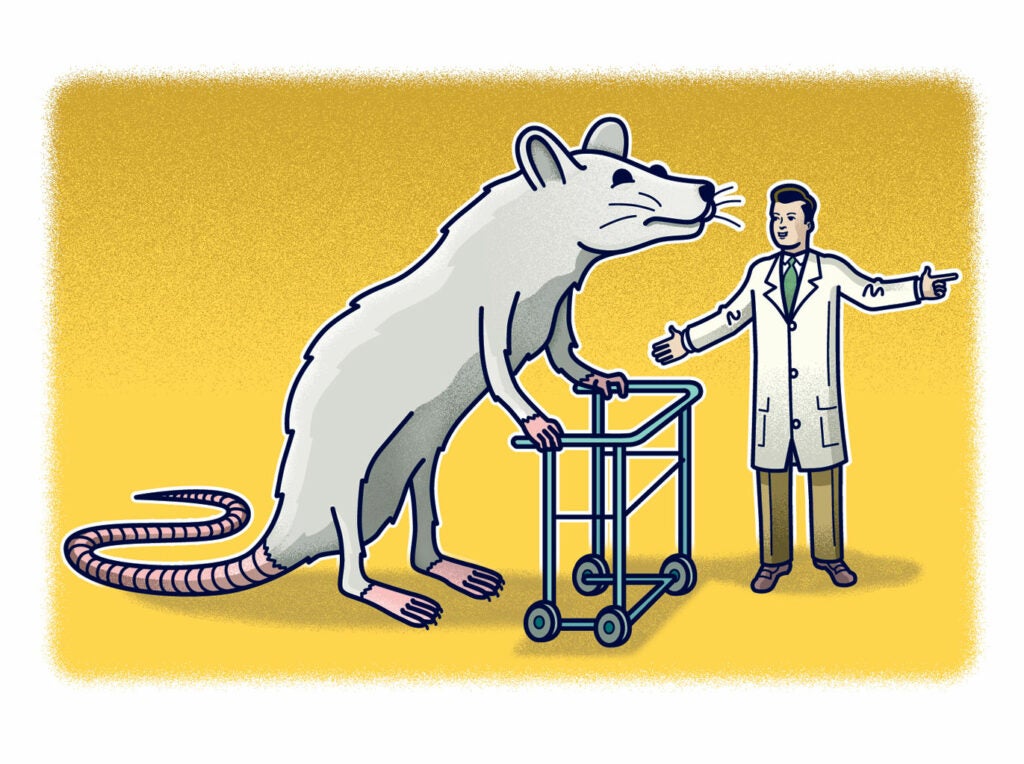 After graduate school, Marc Kubasak set an ambitious goal: Find a way for paralyzed people to walk. But to help people, first he had to help rats. Kubasak took paralyzed animals, transplanted glial cells from the olfactory bulb in the brain to the injured area, and then retrained them to walk. That involved sewing little vests to suspend the rodents from a robotic arm. Then, he says, “I had to make little circles with my fingers moving the rats’ legs on a treadmill for five to 12 hours a day, five days a week.” He walked 40 rats, clocking 2,500 hours over the course of a year. In the middle of the study, Kubasak developed a rodent allergy: His airways closed up and his hand swelled to the size of a catcher’s mitt. He was rushed to the ER. Eventually, he had to work in a total-body suit, complete with battery-powered respirator. But Kubasak persevered. Most of his rats walked again. And this year, doctors at Wroclaw Medical University in Poland and University College London translated Kubasak’s procedure to a man whose spine was damaged in a knife attack. 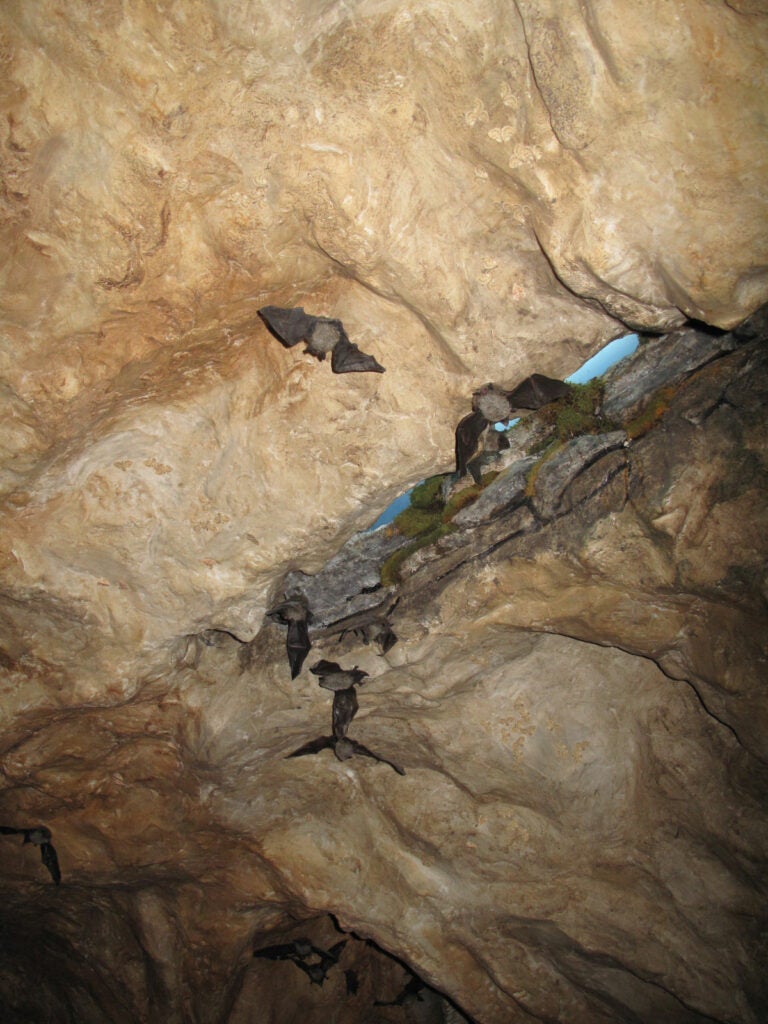 “Wherever there’s bird or bat poop, that’s where I go. I have dug through decades of gull droppings on an island in New York State, 50 years of swift poop in Canada, and a 4,500 year-old pile of bat guano in a cave in Jamaica. The hardest work site involved performing a 60-meter technical climb down into a cave, just as 5,000 bats were leaving for the night. We could feel mist in the air as bat urine rained down. To get a good core sample, I had to dig two meters into the pile, while fungus gnats, which were attracted to the headlamp, got all over my face. I was covered in sticky bat feces and clay. After a few hours, we climbed out, washed up with some water we packed in, camped at the cave’s mouth, and went back down the next morning. The results will be in a forthcoming paper that will examine pollution levels in the bat guano as a result of mining in the area during the last century.”
February 2015
worst jobs