Magnets, that's how it works 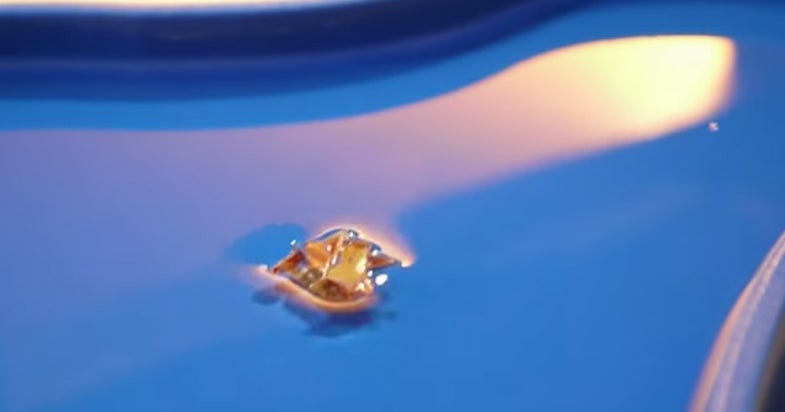 In just under two minutes, this tiny metallic square will, in sequence: fold itself into a robot, roll away, keep a trajectory as it does a figure eight around two columns, crawl up an arm, push a foam block into a bin, swim, carry a load that weighs twice as much as it does, climb a slope, dig through a pile of loose foam cubes, and then, dropped into a jar of acetone, dissolve.

The only thing missing is a soundtrack (I watched it with Guster’s “Simple Machine” playing in the background to compensate, it worked pretty well). The robot is made by researchers at MIT and TU Munich, who recently presented their results at the ICRA 2015 conference in Seattle. Their paper is the incredibly well-titled “An Untethered Miniature Origami Robot that Self-folds, Walks, Swims, and Degrades.”

Here’s how the robot works: the robot’s body is made of PVC, with thin lines where it is supposed to fold, and a magnet. Heated up, the body folds around the magnet. Underneath it all, hidden like the Wizard of Oz behind his curtain, sit four electromagnetic coils, which turn on and off and makes the robot move forward in a direction set by its shape. The body, apart from the magnet, can dissolve in acetone.

While the setup is more elaborate than the robot’s minuscule body suggests, future designs based on this robot could be even smaller, and could work as medical devices sent under the skin. That’s cool, nothing weird at all about getting on a magnet table to have tiny folding robots cart things around inside a body before dissolving away.

Watch it in action below, thankfully outside the skin: