But hey, Sony, an autonomous driving expert thinks the movie concept is cool 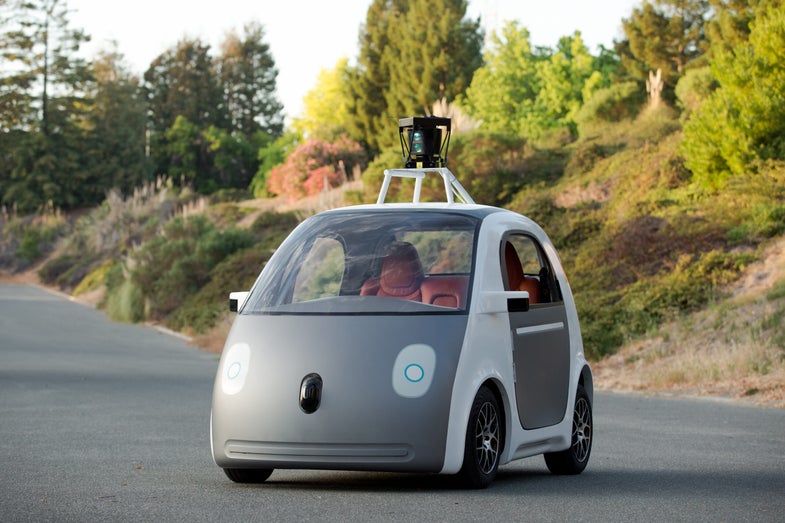 Though Google has no plans to sell cars, the company recently unveiled its first fully-autonomous prototype: A two-seater electric vehicle with a 100-mile range, and no steering wheel. Google
SHARE

Whenever a radical new technology promises to change our way of life, it’s only a matter of time before Hollywood finds a way to turn it into a comedic farce. Case in point: cars that drive you to your destination.

This week, Deadline broke the news about Sony Pictures’ acquisition of “Driverless Car Race,” an action-adventure-comedy film pitched by writer Steve Conrad (The Pursuit of Happyness) and director Gore Verbinski (Pirates Of The Carribean). Based on early reports, it sounds like Conrad and Verbinksi will cast comedians as passengers who volunteer to ride in self-driving cars on an experimental, high-stakes road trip from Paris to Beijing. The goal? See which competing software startup has the best autonomous driving system.

Curious about the real-world feasibility of such a race, we called John Absmeier, director of Delphi Labs in Silicon Valley. (Last month, Absmeier let us ride around in a semi-autonomous Audi S Q5 that had just driven itself from California to Las Vegas.) If a transcontinental race happened today, he says, the biggest hurdle would be reliable maps in the middle of nowhere. “They don’t exist off the shelf. They have to be created and used,” Absmeier told Popular Science.

Suppose the race passed through part of Kazakhstan, for example, that a self-driving car hadn’t yet navigated. The vehicle would have to rely entirely on its sensors and road signs to determine its position. Then there’s the weather. If heavy dust blows around, Absmeier says, a car’s radar could have trouble detecting its surroundings.

“I would say from Paris from Beijing would be close to impossible,” he says.

And there’s this small detail about self-driving cars: They typically observe all of the rules of the road, including speed limit, turn signals, safe-assured distance, and so on. This would be standard practice for any future software companies testing their vehicles on public roads. That’d certainly negate any high-speed antics, barring some creative plot twist.

There’s no date set for the movie yet, but Deadline reports Sony Pictures is fast-tracking the idea. Verbinski told the outlet he doesn’t think humans can be passive while riding in an autonomous vehicle. The movie will explore the breaking point, one in which passengers feel the need to be in control–and inevitable hilarity will ensue.