World’s First ‘Invisible’ Skyscraper Is Not Made Of Metamaterials, Sadly

Still really weird and cool, though

We’ve long been interested in the progression of invisibility, which, for us, usually relies on crazy foundations like metamaterials. So when we heard that U.S.-based GDS Architects was working on an invisible skyscraper in South Korea, our ears perked up. Turns out it’s not invisible in the scientific sense—it’s just designed to appear that way.

GDS received permission this week from the South Korean government to begin construction on the Tower Infinity, located just outside of Seoul. It’s a huge (1,476 feet tall), glassy structure, and when it’s finished, it’ll have the third-highest observation deck in the world. (The highest is the Canton Tower in Guangzhou, China.)

The invisibility trick is achieved by using optical cameras paired with an LED facade on all sides of the building. The idea is that the cameras will capture what’s behind the tower and then the facade will host a projection of that image, so it’ll feel like you’re looking right through it. It’s the same basic idea as the “invisible computer monitor” trick, except updating live thanks to the optical cameras. 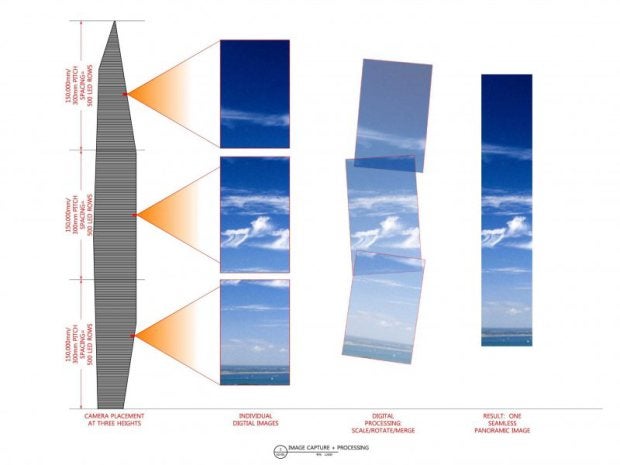 The tower will have three different vertical sections, dividing the tower into thirds. Each section has six sides, to make it easier to display an accurate image behind it. (With fewer sides, it would be near-impossible to make sure the invisibility trick works well from all angles.)