A Device That Converts Sunlight Into Hydrogen Fuel 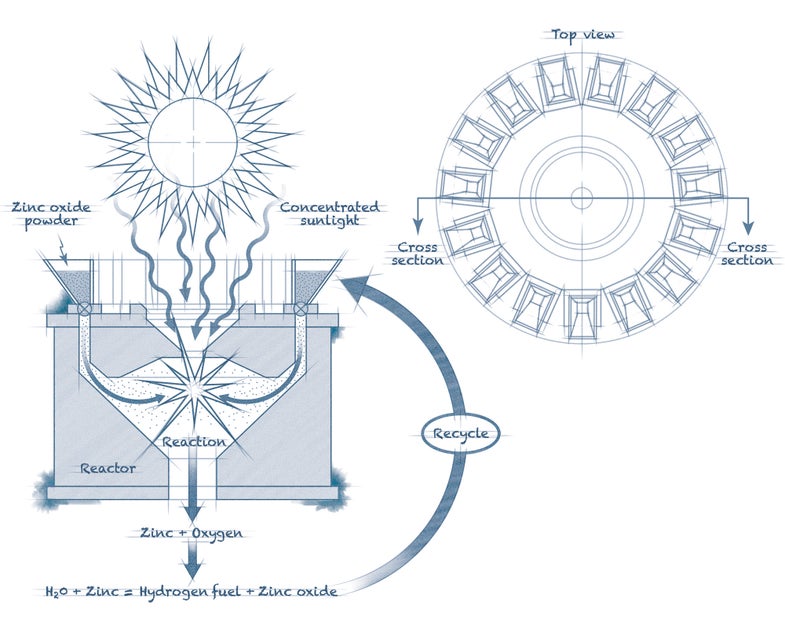 Editor’s Note Although batteries are great for some things, they aren’t quite up to storing large-scale solar power for later use. That’s why many people are trying to make fuel from light instead.

“The idea is to take the energy in light and store it as a fuel we can use later. So we made the GRAFSTRR (Gravity-Fed Solar-Thermochemical Receiver/Reactor)—a 1,000-pound cylinder of insulated steel, about 3 feet wide and 2.5 feet tall. In the lab, 10 lamps simulate only 10 to 20 kilowatts of sunlight. (In the real world, though, tens of thousands of small mirrors across a field would reflect sunlight into the reactor.) The light enters the top of the reactor and passes through a circular quartz window that keeps out air, which can contaminate the chemical reaction inside. At the light’s most concentrated and hottest point—3,000°F—it enters the reaction cavity.

Fifteen hoppers drop zinc oxide powder into the cavity. When the radiation there hits the zinc oxide, it breaks the bond between the zinc and the oxygen, making free zinc. In the future, a second reactor would use the zinc to strip the oxygen from water, making hydrogen gas.Theoretically, we could capture about 40 percent of the energy, but in lab experiments to demonstrate the design, we get less than 3 percent. Our reactor is mostly a proof-of-concept, but I think it could be scaled up in my kids’ lifetime.”

–Erik Koepf is a mechanical engineer. He worked on the reactor as a graduate student at the University of Delaware, in collaboration with the Swiss Federal Institute of Technology in Zurich.