The solarclave could sterilize medical devices in areas without reliable electricity. 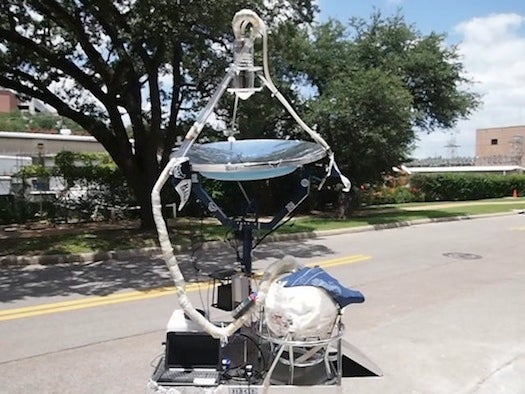 Though the steam-generating autoclave has long been the standard method of sterilizing medical equipment, this could change with the solarclave, a new solar-powered device developed by engineers at Rice University.

The research team designed the solarclave to function without an external electricity source. Though MIT created a similar device, this is the first to pass FDA sterilization tests. The device could be especially useful in developing countries with limited access to reliable power supplies, where people are disproportionately likely to contract bacterial infections.

In contrast to autoclaves that require electricity to produce steam, the solarclave uses sunlight and recyclable metal and carbon nanoparticles. When mixed into an aqueous solution, the nanoparticles absorb energy more quickly than the surrounding liquid. As sunlight collects into a mirrored dish, the solution heats up and converts the water molecules into steam. The device is very efficient: it uses only 20 percent of its energy to gear up to this point. The other 80 percent is spent sustaining the steam.

The team created two prototypes, each of which was tested on its ability to kill Geobacillus stearothermophilus, a bacteria notoriously difficult to destroy with heat. Within 30 minutes, both solarclaves had killed their entire samples.

This type of device could eventually be used to purify water or even generate electricity, the researchers predict.