The software should be ready for schools by the 2013-2014 school year. 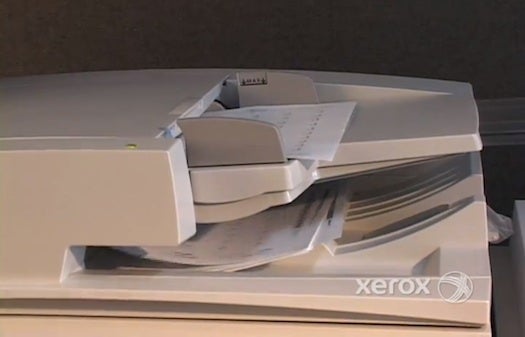 Talk about an upgrade. Xerox plans to introduce software this year that would transform certain combination printer-copier-scanners into automated grading machines, the Democrat and Chronicle reported.

Teachers would be able to send pages of printed tests with handwritten answers into the machines and get grades back. While it grades, the machine keeps track of which students do poorly on which questions, so it is able to tell teachers who’s struggling, and with what concepts. You can see the machine at work in this video from Xerox.

Before, it was easier to get this kind of analysis for multiple-choice tests—you know, the ones where you have to be careful to bubble in answers exactly as instructed—but now testers can start to get more detailed data from handwritten tests, too. Xerox hopes to save teachers time and allow them to focus on tasks that machines can’t do, such as lesson planning, Deborah Drago-Leaf, a support manager for the company, told the Democrat and Chronicle.

The software, called Ignite, needs some pointers first. Teachers enter in the test and an answer key, which Ignite uses not only to figure out which answers are right but also to know where on the page to look for handwritten answers. Teachers also need to tell the software what concepts each question covers.

Fourth-graders at one school in Rochester, New York, that has tested the software were impressed. Their teacher, Pat McDonald, named their machine Ziggy and told the Democrat and Chronicle that the kids have written poems about Ziggy. “They think it’s cool the machine can read their handwriting,” she said. She herself was enthusiastic about the technology.

Xerox plans to have Ignite ready for schools to buy for the 2013-2014 school year.