PETMAN tries on some new duds. 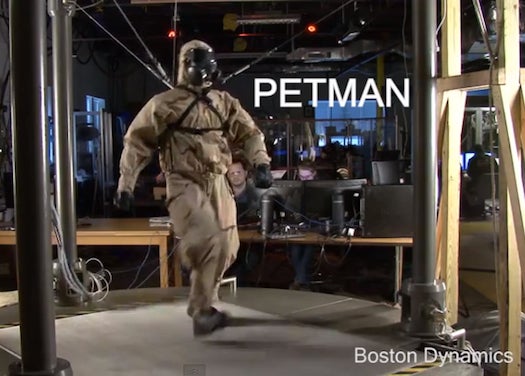 The robot-makers over at Boston Dynamics make some consistently amazing robots, and consistently amazing videos of said robots. Another of their ‘bots, BigDog, took runner-up in our drones vs. robots bracket, and the robot you see here, Petman, didn’t do too bad either.

Petman, which is probably one of the more human-shaped of the humanoid robots around, is being used here to test temperature-regulating camouflage clothing and a gas mask. (The robot’s made with Department of Defense funding, after all.) Any human wearing this suit will probably be a little less–lurch-y? lumber-y? gaitless?–than Petman, but it looks like the suit held up through the series of stretches it tries to do. Seriously, it practically does a jumping jack.