How The New $100 Bill Will Foil Counterfeiters

The most complicated $100 bill yet 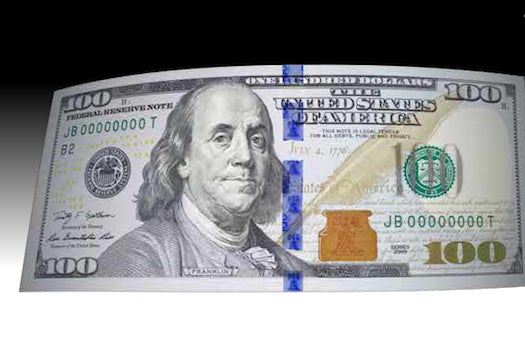 For as long as there has been money, there’ve been people trying to make fake money. In the U.S., the latest effort to stop counterfeiting will arrive October 8, when the next $100 bill is released.

The Federal Reserve has mixed in new features to make the bill more difficult to replicate, like a blue security ribbon running down the front. When the bill is tilted, columns filled with the number “100” and tiny bells rotate. Tilt left to right and the columns move up and down; tilt up and down, the columns move left to right. The ribbon is woven onto the paper, not printed, making it tougher to duplicate. It’s composed of thousands of lenses that magnify the marks and make them appear to move in different directions–not easy for a counterfeiter to remake in a basement.

To the right of Ben Franklin is an ink well with a bell inside, and both the well and bell look copper-colored until someone turns the bill, which changes the bell to green. The “100” printed in the bottom right changes color the same way. That’s probably made from optically variable ink, which is used for anti-counterfeiting because it’s difficult to obtain (very few companies sell it) and can’t be color-copied to change in light.

The Fed is also including older tried-and-true techniques for stopping counterfeiting. A common method is “bleaching,” where real $1 bills are turned into fake hundreds, meaning they still feel like the genuine article. So on the new $100 bill is a watermark that appears when backlit: it sort of looks like a child’s elementary school sketch of Franklin. (A $1 bill, or any other denomination, wouldn’t feature Franklin.) A raised printing process also gives Franklin’s shoulder some roughness, meaning the bill isn’t completely uniform, but in a different way from other bills.

Maybe coolest of all are the tiny hidden words in the picture. On Franklin’s collar you can just barely make out a finely detailed “THE UNITED STATES OF AMERICA,” while “USA 100” is printed in the top right and “ONE HUNDRED USA” is on the quill. (But where are the secret messages from the Free Masons???)

You can take a virtual tour of the bill here.