Running cockroaches are pretty good at regaining their footing when faced with obstacles, like the sole of your shoe. 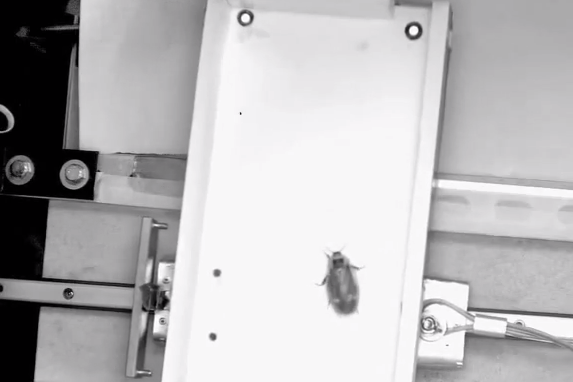 Cockroaches can recover their footing before their nervous systems even kick in to tell them how, according to new research. This means their legs recover passively, without needing instructions from the command center–a useful lesson for people trying to design better multiple-legged robots.

Shai Revzen, an assistant professor of electrical engineering and computer science plus biology at the University of Michigan, is studying cockroaches with a goal toward building better robots. As a graduate student at the University of California, Berkeley, he designed an experimental setup that records high-speed imagery of the insects scurrying across a small bridge. The roaches run onto a platform that is then released from an elastic spring, sending it swinging sideways with great force. It’s equivalent to Revzen running and being tackled by a sumo wrestler, according to a U of Michigan news release. Watch the roaches run below.

They found that the nervous system kicks in pretty late, meaning the insects don’t need their senses to recover. For whatever reason, the nervous system gives the physical system a second to figure things out before sending sensory pulses. That suggests passive robots might be better-equipped to handle surprises, rather than coded to respond to any scenario, Revzen said. This is contrary to widely held assumptions about how robots should respond.

“We shouldn’t try so hard to control things actively; we should just build a good passive mechanical system and end up with a robot that’s far simpler and more reliable,” he said.