Fifteen years ago today, Ted Kaczynski pleaded guilty to being the Unabomber. This is the story of what happened to his final mail bomb. 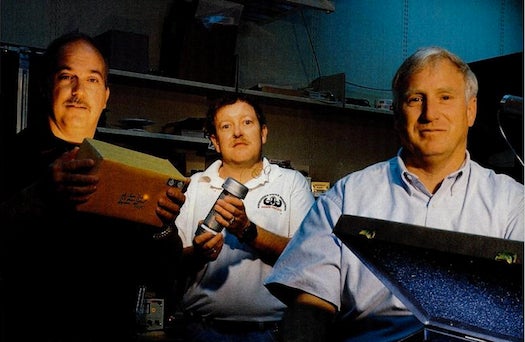 Vic Poisson, Rod Owenby, and Chris Cherry (left to right) had to dismantle Kaczynski’s bomb without destroying it

On January 22, 1998, Theodore Kaczynski pleaded guilty to a 17-year bombing campaign that killed three people and injured 23. The “Unabomber,” now serving a life sentence in prison without parole, had been designing explosives in a one-room cabin deep in the Montana wilderness.

When FBI agents arrived at the tiny house after Kaczynski’s arrest, they discovered a live bomb, packaged and ready to be mailed, under the bed. Kaczynski built his bombs so that they couldn’t be linked back to him, and thus far the FBI had gleaned only a few clues from debris fragments. Normally, a bomb disposal squad could simply remove the device and explode it harmlessly, but the FBI needed this bomb intact for forensic evidence. How could they defuse the explosive without destroying it?

The FBI knew it couldn’t handle the problem alone, so it called in a crack team of nerds: Chris Cherry, a researcher at Sandia National Laboratories in Albuquerque; veteran Sandia assistant Rod Owenby; and Vic Poisson, a long-time associate of the Riverside, Calif., police department. The team flew to Montana and, one by one, entered the chemical-filled, 10- by 12-foot cabin, Popular Science reported in October 1998.

Cherry’s team constructed wooden ramps up and into the cabin, and a remote-controlled robot carefully carried the device to a nearby field. The bomb was then placed on a wooden stool; the team built an igloo of heavy timbers around the stool, covering the structure with a blue tarp held down by sandbags. Nobody was overly concerned that the bomb would detonate while it was being moved, because Kaczynski’s bombs were always designed to explode when they were opened. But from this point on, the wooden structure would contain any explosion, with the blue tarp acting like a big tablecloth to capture any forensic crumbs.

Read the rest of the story in the October 1998 issue of Popular Science.