Cameras that can be mounted on helmets or weapons will help warfighters see in the dark and in all kinds of weather. 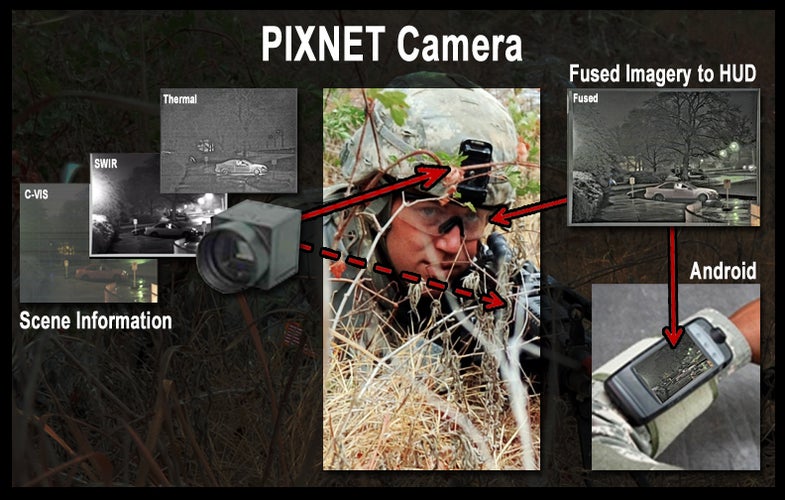 Warfighters have a whole suite of cameras they can use to see in the dark, through fog or smoke, and in broad daylight–but that’s actually a problem, according to DARPA. Nobody wants to carry a suite of things. It would be better to have just one item that can do everything your suite could do.

DARPA wants a multi-band head-up display, which could be mounted to a helmet or a weapon scope, that combines several wavelengths of light into one image. Sunny? No problem–the camera can see in visible light. Smoke bomb blocking your view? No sweat; the camera can see thermal infrared signatures. The system would also have near-infrared capability to help users see through darkness.

A new DARPA project called the Pixel Network for Dynamic Visualization (PIXNET) seeks proposals for new sensors that can do all of this in one package. A successful proposal would be small, lightweight, low-power and low-cost, said Nibir Dhar, DARPA program manager for PIXNET. The system would communicate wirelessly with Android-based smart phones to fuse the images together, like you can see in the inset above. The warfighter would see a scene with visible imagery, thermal sensitivity and near-IR capability all in one.

Existing sensors are a good starting point, but they’re not advanced enough to combine multiple functions the way DARPA wants. Combining reflective and thermal bands will be a challenge, not to mention making it ultra-portable. “What we really need are breakthroughs in aperture design, focal plane arrays, electronics, packaging and materials science,” Dhar said. The solicitation is online here.