Video: The Closest Robotic Legs Have Ever Gotten to Mimicking Human Gait

Getting a robot to walk is doable. Getting it to walk exactly like a human? Not so easy. But now... 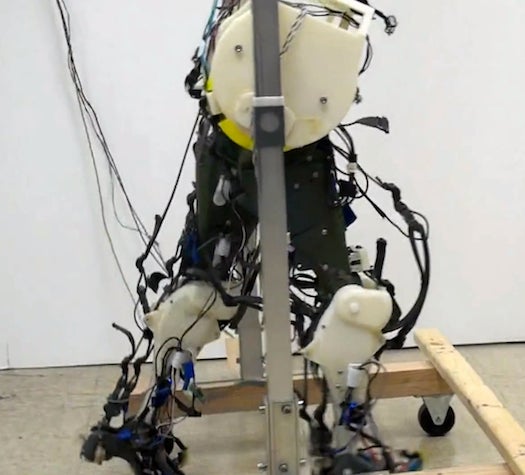 Getting a robot to walk is doable. Getting it to walk exactly like a human? Not so easy. But now we’re getting there, with researchers from the University of Arizona unveiling a first-of-its-kind set of biologically accurate robot legs.

To make it possible, researchers set up a fake half-center, a simple neural network of two neurons that fire interchangeably, producing the rhythm of human walking, while sensors in the robot send feedback about its environment. Researchers believe babies might operate on a similar half-center system, even before they walk, and that a half-center might be what provides a framework for people with spinal cord injuries to re-learn how to walk.

Even though it’s not able to balance itself, the resulting robot, researchers say, is as close as we’ve gotten to an accurate representation of human walking.