Testing the Novara Gotham: A Bike With Infinite Gears

Cyclists of the world unite! You have nothing to lose but your chains (and derailleurs) 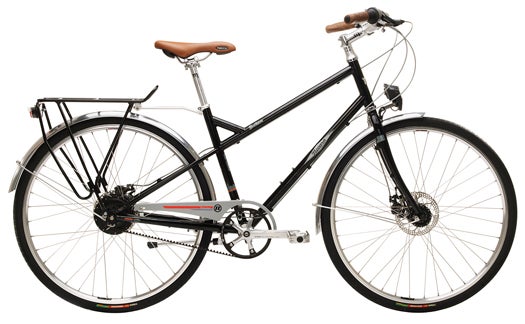 Summer’s here and it’s time to get back on the bike. We could have looked at a fancy new ultralight, but the NuVinci is the bike that’s really going to shake things up. It answers a question you may not have thought to ask: what if you could pick up a new ride with a transmission that made sure you’ll never be in the wrong gear?

A NuVinci bike effectively has an infinite number of gears. You can adjust it smoothly, without worrying about clicking into gears, to provide the precise right amount of resistance. You can start at a very low gear to pedal easily and then smoothly ramp up to a higher gear as you gain speed. And since everything is internal, repairs are rarely necessary. It’s a revolution, really–one of the most fundamental changes to the bicycle in decades.

On a regular bicycle, the input force comes from your legs, turning the pedals, which in turn spin the chainring — the big toothed gear up front. A chain carries that force to the cogs connected to the hub in back, which in turn turns the rear wheel; the ratio between the number of teeth on the chainring and the number of teeth on the current cog determines what gear you’re in. A “high” gear turns a big ring up front and a small cog in back–hard to pedal, but a lot of movement from each revolution. Reverse it and you get a “low” gear–easy to pedal, but not much movement.

But more often than not, there is no right gear for a given situation — fourth gear is too low, fifth too high, say. So why not do away with those pesky steps altogether? A continuously variable system does just that.

In 1490, Leonardo da Vinci sketched the outline of a stepless, continually variable transmission, but it was never built. Fast forward some 500 years, when realtor-turned-inventor Donald Miller looked, after a bit of research, to da Vinci’s idea, and came up with a continuously variable transmission (CVT) suitable for use in a bicycle hub. He christened the system the “NuVinci,” and founded Fallbrook Technologies to explore its applications in cycling and beyond.

In 2007, Popular Science told you about the first bike to use Fallbrook Technologies’ original NuVinci n171 hub, the Ellsworth Ride, which made the Best of What’s New list. That bike had a significant downside, namely price — the cruiser that came in at a cool $3,000; $4000 with another modern convenience, Gates’ lubrication-free Carbon Drive belt system, in place of a traditional chain (which works sort of like a single-speed bike–the hub does the work of translating that single gear into other ratios). While pricey everyday bikes have become somewhat more commonplace since then, the Ellsworth’s price meant it had little chance of meeting Miller’s original goal of making it easier for more people to get out on the road on two wheels.

But things have changed quite a bit over the last five years. The NuVinci’s latest iteration, the N360, shaves several pounds off of the original design, and made mounting the hub on a wide variety of bikes a whole lot easier. Al Nordin, president of Fallbrook’s bicycle group, told me that 50 manufacturers around the world have adopted the NuVinci, using it in some 90 models.

Most of these are practical city bikes — the sort of everyday transportation that Donald Miller had envisioned. And we’re at the point where the economics are starting to make a lot more sense, to the point where mass-market brands — REI for one — can bring out a fully appointed, practical city bike such as the Novara Gotham, which packs a NuVinci N360 hub and a Gates belt drive, for $1,299. It’s a new world of commuter convenience, for a (relative) song.

So we borrowed a Gotham from REI and got to putting in some miles.

The first thing you notice about the NuVinci in action is…well, nothing. Gliding along in near silence (it’s a lot quieter than a traditional internally geared hub), you twist the grip shifter to make things easier or harder, and that’s all there is to it. A cute little rubber indicator that looks like a strip of road with a cyclist on it, residing in a window on the twist shifter, provides some visual feedback — shift towards underdrive, making your job easier, and the indicator strip curls up to indicate a hill; push things towards overdrive and the “road” flattens out — but frankly, it’s unncecessary. The sensation is unprecendented, really — absent the reassuring click-click-click of a traditional internal-gear hub, or the gentle whir and clunk of a derailleur-equipped ride, you feel a bit removed from the mechanicals of the bike.

The Gates carbon belt contributes to the oddity of the sensation — the “chain,” like the rest of the transmission, is nearly silent. Without having to lube the chain, the bike remains remarkably clean — you’ll still have to wipe the thing down of road dirt and water, obviously, but it’s really refreshing not to have to deal with grease (and you can say goodbye to stains on your pants cuffs or the good ol’ chainring tattoo). It’ll never rust, no matter how much you neglect it. Lifespan, according to the manufacturer, is expected to be in the neighborhood of twice that of a chain — in practice, that’ll mean at least several thousand miles. The Gates belt is a single continuous piece, so it does require a custom frame with an opening in the drive side of the rear triangle just to get it on there. Our test Novara Gotham had a removable section bolted in just above the drive-side dropout. The Gates belt’s tension needs to be adjusted correctly (much as you’d adjust the chain tension on a single-speed or track bike); the Novara frame is supplied with standard vertical dropouts, so belt tension adjustment is accomplished via an eccentric bottom bracket.

While traditional internal-gear hubs have been notoriously inefficient mechanically when compared with derailleur systems (part of the charm of the uber-expensive Rohloff 14-speed internal hub is that its mechanical efficiency nears that of a derailleur bike), Fallbrook hasn’t publicized this metric (and there’s been some grumbling from critics about this), emphasizing, rather, that in a real world situation the N360 maximizes the overall efficiency of the rider-bike system, since the infinite “gear” choices better keep the rider at optimal pedaling cadence than any other system. Perhaps you could say they’ve sidestepped the issue, but they’re not after the performance market in the first place. In terms of performance, the Novara seemed roughly equivalent to other heavy commuter bicycles I’ve ridden; it felt about as sprightly as my usual ride (a Civia with an SRAM internal hub and otherwise similar parts list) — perfectly enjoyable for around-town use and everyday load hauling.

Racers talk about a good day as one on which the bike seems to have no chain, and in that respect the N360 really does go some way towards making every day a good one (not that anybody would want to race a NuVinci bike, with its 5.4-pound hub — but that’s not the point of the system anyway). I’ve ridden plenty of well and poorly tuned bicycles over the years, and while I’m not sure I agree personally with Fallbrook’s argument that having to shift makes cycling difficult or even less than enjoyable, I have to admit that the system is impressively smooth and intuitive, beyond anything I’ve experienced from any internally geared hub, and a fundamentally different experience from a derailleur bike — it’s more like riding a single-speed than anything else. It’s a little bizarre, though in the nicest possible way.

The basic concept is pretty simple. As in other internally geared systems, a traditional front chainring and cog are used to provide power, but the entire transmission resides within the rear hub, rather than the changing ratio between a front chainring and a set of rear cogs determining the relationship between power input and output.

While other internal hubs simply move a miniature set of gears within the hub, the NuVinci continuously varies the ratio between an input disc (driven by the single cog — this plays the role of the front chainring in a standard transmission) and an output disc (which is connected to the hub shell, transferring power to the wheel itself — acting, more or less), using a bunch of 20mm ball bearings (8 in the original n171, six in the newer N360) suspended on idlers between them. The whole shebang is suspended in a bath of hydraulic fluid —the bearings, disks, and other metal parts don’t actually contact one another, but rather, when the system is in motion the thin film of fluid between parts momentarily becomes an elastic “solid,” enough to carry force as it flows past. This makes the NuVinci a “traction drive” — the fluid itself transmits the torque, rather than the metallic parts; this is also the secret to the NuVinci’s impressively long service life and freedom from regular maintenance — the hub is sealed, and according to the company, will need no attention over the course of its expected lifespan.

In operation, the bearings rotate on axles; when you shift “gears” you change the angle at which the captive bearings contact the two disks, and thus changing the relative diameters and, ultimately, the rotational speeds of the discs. Make the input disc “smaller” and faster than the output disk, and you get underdrive, nice for climbing a hill or getting underway; make it larger (and slower), you get overdrive for cruising on the flats. Unlike a geared transmission, you can adjust the system to get precisely the right ratio for the terrain and your fitness (or lack thereof). You just have to experience it to really get the hang of it.

Fallbrook Technologies recently showed off another intriguing project — Harmony, a practical automatic transmission for bicycles. This isn’t the first automatic transmission for bikes (Suntour marketed a Browning-designed system in the 1980s, and more recently Shimano’s short-lived Coasting city-bike groupset featured an automatic option as well; SRAM has also shown a simple auto-shift system.) But in combination with a continuously variable transmission, an automatic might make for an almost automotive experience, of interest to those who’d otherwise have little interest in riding bikes. At least that’s the idea. Based on the N360 hub, the Harmony system swaps in a new shifter unit and interface that automatically chooses the appropriate “gear” ratio based on a selected pedaling cadence — basically, you decide how much effort you want to put in, and the transmission adjusts itself to the terrain. Manual override is also available. For now, the Harmony system is only available for e-bikes (the shifter requires a power source), but a battery-driven version for pedal-driven bicycles should be available by fall of this year, says Al Nordin.

But the real future for Fallbrook and NuVinci may lie beyond cycling tech. Rob Smithson, Fallbrook’s chief technology officer, “doesn’t see any limits to the scalability” of the NuVinci system, and has his eyes on bigger prizes – heavy machinery, power generation, and automobile power trains. Bicycle transmissions have long influenced the design of other machinery, and Smithson is hoping NuVinci is poised to have a similar impact. The company already has a supercharger ready for automotive OEMs, and is in talks with some major power generation manufacturers to provide transmissions for things like massive wind power installations.

But whatever successes the company may have in powered applications, Al Nordin wants the NuVinci “to be known as something that makes the bike simpler and easier to ride. We’d like to be known as a company that brings more value to the bike, and gets riders on the bike more often.”