The MS Tûranor PlanetSolar pulled into Monaco’s Hercule Harbor on Friday, completing its journey around the world–the very first solely... 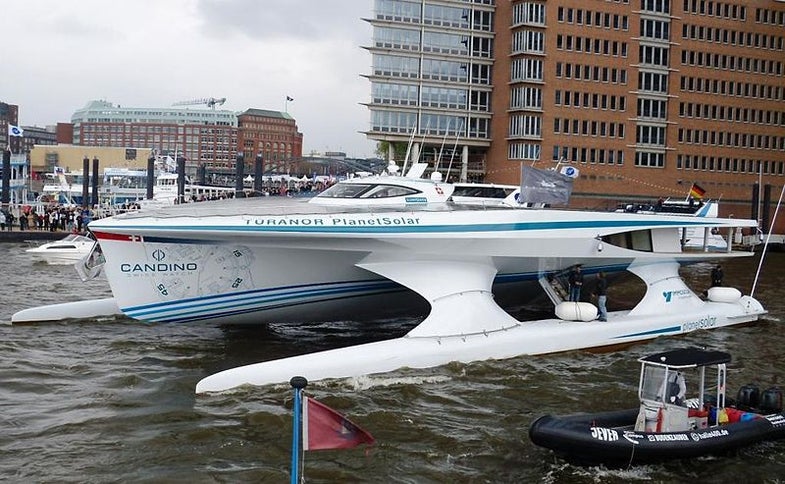 The MS Tûranor PlanetSolar pulled into Monaco’s Hercule Harbor on Friday, completing its journey around the world–the very first solely solar-powered watercraft to do so. Of course, it’s not an ordinary ship. It cost over $16 million USD, has over 500 square meters of solar panels, and can house 200 people.

The ship is mostly designed for efficiency–it has a super-light hull made mostly from foam and carbon fiber, and is designed for minimum friction with the water. That’s because even with 38,000 individual photovoltaic cells, it still can’t drive all that much power to its four electric motors, which can only output 26-horsepower each. Still, it can glide along at 14 knots–not a speed demon, but respectable.

The 115-foot-long ship–also the world’s longest solar-powered ship–took 585 days to travel all seven seas (are there actually seven seas? A high five to anyone who can name the seven seas in the comments), during which the crew actually had to fight off pirates, and its fate after its trip is unclear. Possibly it’ll be used as a research vessel, or it could even be sold to the highest, ludicrously wealthy, environmentally-conscious bidder.