National Geographic has a new feature up today in which they discuss the new finding of a cave in the... 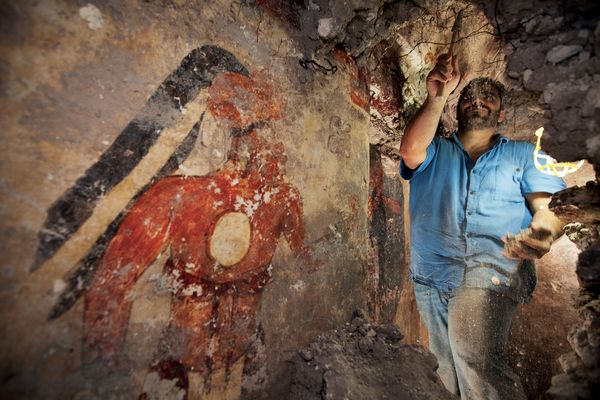 National Geographic has a new feature up today in which they discuss the new finding of a cave in the midst of an unexplored Mayan megacity–a cave with very particular glyphs on the walls. Those writings include charts to predict lunar cycles and other calendrical workings–including a cyclical Mayan calendar that counts many thousands of years in the future. Which means, um, that stuff about the Maya predicting the end of the world is kind of…factually problematic.

The article’s pretty great; this kind of calculation room was probably a part of every Mayan city, but it’s the first to be found well-preserved enough to examine. This particular city, named Xultún, was “discovered” about a hundred years ago, north of Tikal and south of San Bartolo, two other Mayan cities. The calendar-type charts on the wall of the cave emphasize the Mayan concept of cyclical time, and counts some 7,000 years in the future, which pretty much debunks the 2012 myth (which is itself based on a calendar that shows the year “starting over” in 2012).