Never worry about answering the phone or stapling documents again 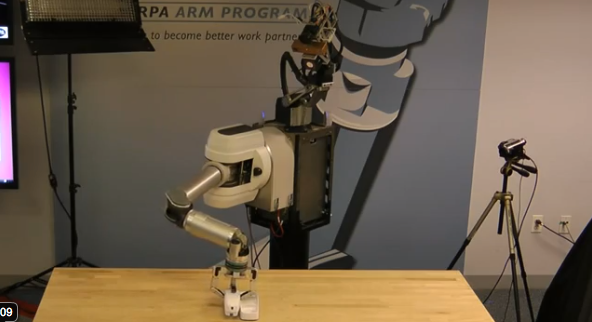 Bad news for long-term receptionists: DARPA’s ARM (Autonomous Robotic Manipulation) robot can perform a whopping 18 different reception-ready tasks, from stapling to answering the phone to…turning on a lamp? Grasping things? Also it can’t speak, or redirect calls, really, but it can drill a hole in a piece of wood, which I’m not entirely sure I can do, so it’s an easy shoo-in for our incredibly prestigious Robot of the Week award. Congratulations! Watch the video after the jump.

This particular robot has apparently been around for about two years, so it’s pretty impressive that they’ve gotten it this far. It’s not trained to do this stuff–it uses visual and touch sensors to see and feel the shape of objects and interact with them accordingly, basically the same way we do. It’ll eventually be used in military applications where it’ll have to rely on its own senses to operate.