Pretty Space Pics: The Eye-Like Helix Nebula, Staring Right Back at You

Today in pretty space pics: The Helix Nebula, captured in infrared light by the European Southern Observatory’s VISTA telescope at... 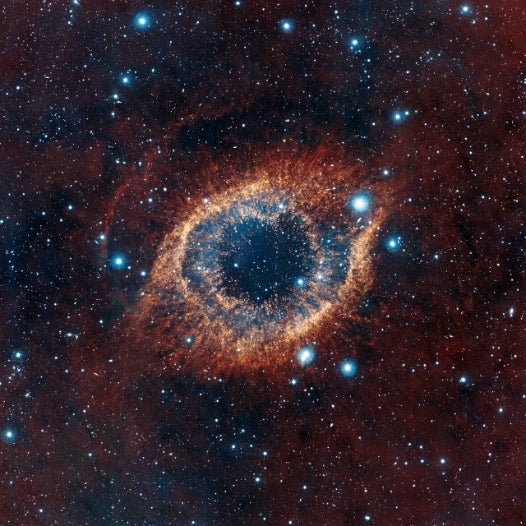 Today in pretty space pics: The Helix Nebula, captured in infrared light by the European Southern Observatory’s VISTA telescope at Chile’s Paranal Observatory. How this nearby space fixture escaped being named the Eye of Sauron, we have no idea.

The Helix Nebula is actually one of the closest planetary nebulae to Earth, just 700 light-years away in the constellation Aquarius. And the source of its beauty is a star not so different than our own, albeit one that is far further along in its life cycle. The tiny blue dot in the middle of the “iris” is the aging star, well on its way to becoming a white dwarf, that slowly expelled its outer layers into concentric shells of gas as the star was dying.

The result is the round, eye-shaped structure of dust and ionized gas you see here. All said, the material from the nebula reaches out about four light-years from the central star, so that tells you just how big the helix nebula actually is. But if that’s still not big enough for you, click on over to the ESO’s site, where you can download hi-res, wallpaper-worthy shots. And see exactly what infrared imaging does for you via the ESO video below.