Video: Swarming Teams of Robo-Farmers Will Change the Face of Agriculture

Farming has always been about man, says David Dorhout, but man is now the limiting factor in agriculture. The future... 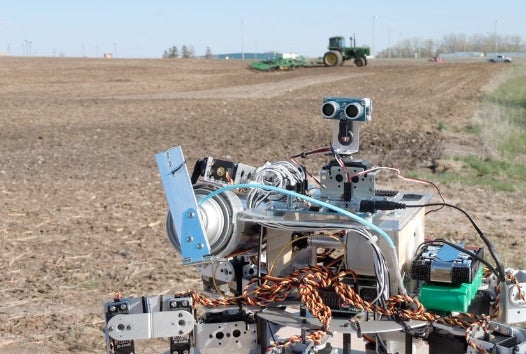 Farming has always been about man, says David Dorhout, but man is now the limiting factor in agriculture. The future of farming is not about getting more efficiency out of each farmer–the human farmer has already been pretty well optimized by technology. Rather, the future is about getting more production out of each tract of farmland. The future, in other words, is Prospero, Dourhout’s swarming, game-theory-crunching fleet of autonomous robo-farmers.

Prospero is a prototype for a larger, singular robotic organism that Dorhout is working toward in his spare time (he’s an entomologist by trade and a roboticist by hobby, which makes him very good at his hobby). Right now, he’s got a small fleet of six-legged robots capable of working together to optimize the planting of a given piece of farmland using swarm technology and software running game theory. Via infrared, the robots communicate with each other, marking places that have already been planted and signaling to each other when one needs help seeding a particular plot.

The result is a system that can optimize things like seed spacing and remember where each individual seed is planted. It can also make very good decisions about when and where to plant seeds based on varying soil types, even within the same field. It’s essentially fully customizable seed planting on a foot-by-foot basis, Dorhout told Discovery News.

Moreover, Prospero is simple. Eschewing data-dense systems like GPS, Dorhout instead designed the Prospero bots to recall locations of seeds by simply talking to each other as they amble along. Following the model of ants, which mark places of interest (read: food) with pheromones so other ants can find them, he designed his ‘bots to mark planted seeds with a shot of white spray paint that changes the reflectivity of the soil around the site. Other robots register this change in reflectivity, allowing them to see every seed in the field.

Prospero is just the beginning, Dorhout says. He wants to build a robot that can plant, maintain, and harvest an entire crop all autonomously and, more importantly, in the most efficient way possible. Robo-farmers could work around the clock to help keep a field in optimal conditions, fighting pests and other invasive plants without chemicals and increasing both crop yield and crop health. His six-legged robo-farmer is the first step. See Prospero in action, as well as Dorhout’s robo-centric vision of the future of farming, in the video below.