Video: Playing With Fire Aboard the International Space Station

The FLEX experiment measures the strange behaviors of fire in microgravity 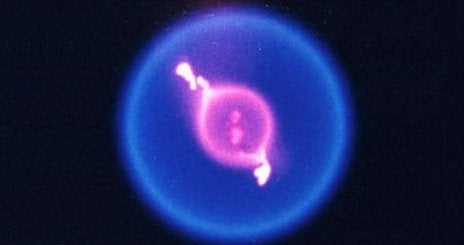 It might sound a bit brazen to play around with fire in an artificially oxygenated environment, but that hasn’t stopped the crew of the ISS from studying the behavior of flame aboard the orbiting science station. As Space.com shows us, fire behaves very strangely–relative to the way it behaves on Earth, at least–in mircrogravity, and the Flame Extinguishment Experiment (FLEX) has conducted more than 200 tests over two years to try and understand why.

That understanding could lead to better fire extinguishing systems for future spacecraft as well as better methods of controlling flames here on Earth. But first, FLEX and the scientists studying its data have to figure out some of the more mystifying tricks fire pulls in low gravity.

For instance, flames on earth expel heated gases that rise from the fire, taking combustion products out with them and pulling oxygen in to sustain the flame. Take away the gravity and Earth atmosphere, and the hot gases don’t rise. Rather, a process called molecular diffusion sustains the combustion process, but it does so at a 100 times slower rate than on Earth. Flames can also burn with less oxygen and at lower temperatures, so extinguishing materials must be more concentrated.

And then there’s the FLEX finding that heptane and methanol droplets–the two fuels burned in FLEX–appear to continue combusting after the actual flame is extinguished in some cases. This, researchers say, is currently completely inexplicable.

Findings from FLEX could lead to better fire suppressants and better ways to utilize liquid fuels. They could also lead you to lean closer to your screen when examining the bizarre spherical flame behaviors in the video below.