When space agencies or institutions want to erect a space telescope, they usually look to some remote area like Chile’s... 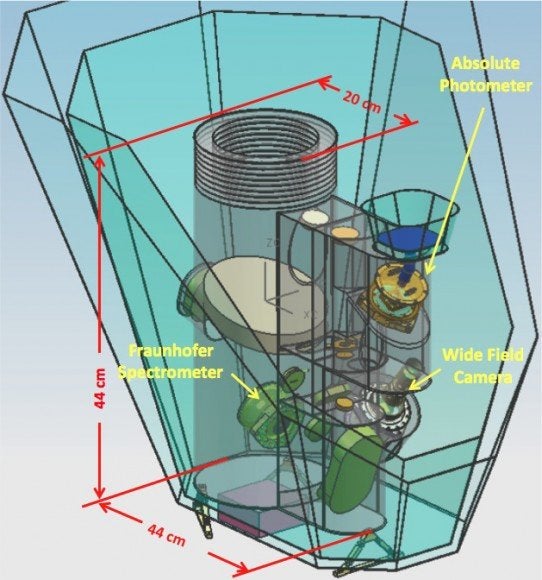 When space agencies or institutions want to erect a space telescope, they usually look to some remote area like Chile’s Atacama desert where clouds are few and light pollution is likewise scarce. But a team of NASA/Jet Propulsion Lab researchers wants to go even further off the grid to escape the likes of clouds and light pollution. Many millions of miles off grid in fact. The team is exploring the idea of tethering a space telescope to the next space mission to the outer solar system so they can gather optical data from beyond the asteroid belt.

Their target is a better reading of the extragalactic background light (EBL), which is essentially the total combined light pouring into our galaxy from other sources across the universe. It’s like an optical tally of everything else that’s out there. But from our vantage point, it’s hard to get a good read on the EBL. Zodiacal light–sunlight reflected by grains of dust in the asteroid belt or light from grains that are radiating themselves–pollutes our view of the EBL. There’s no good way to accurately extract that noise from data collected by telescopes on and around Earth, so our picture of the EBL remains blurry at best.

But at about five astronomical units outward–at roughly Jupiter’s orbit–the view of the EBL becomes about 30 times clearer. At Saturn’s orbit, that number jumps to 100 times clearer. ZEBRA, the Zodiacal dust, Extragalactic Background and Reionization Apparatus would pack three optical and near-infrared instruments and piggy-back on a mission already headed to the outer solar system to get a better vantage point on the EBL. It would then correlate that data with data collected from the ground.

Doing so would tell astronomers a lot of things, namely by shedding light on the Era of Reionization. At this point in cosmic history–roughly 450 million years after the Big Bang, or more than 13 billion years ago–the first stars began to pour UV radiation into the intergalactic medium, stripping away electrons and reionizing hydrogen that had been neutral throughout the so-called Dark Ages of the universe’s early history. This phase change marked a serious transformation for the universe and greatly shaped the universe we have today.

So naturally, the Era of Reionization is of great interest to astronomers, as is a clearer reading of the EBL. ZEBRA could provide a window to both. All it needs is $40 million and a ride.

Catch an interview with two of the scientists behind ZEBRA over at Universe Today.