Video: The Motion-Sensing Banking App We’ve All Been Waiting For

Today in “Solutions to Problems Nobody Actually Has,” a Lithuanian company called Etronika has created an app for Kinect that... 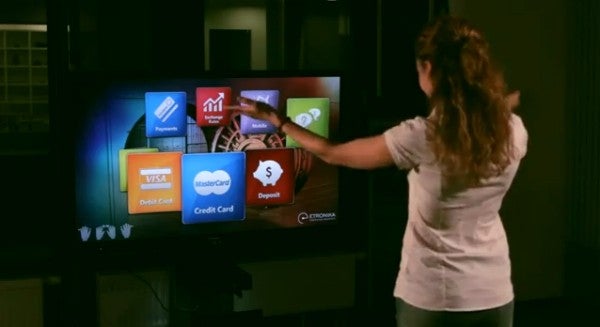 Today in “Solutions to Problems Nobody Actually Has,” a Lithuanian company called Etronika has created an app for Kinect that allows you to bank without the stress, difficulty, or efficiency of keyboards, mice, or touchscreens. Instead, you gesticulate wildly at your TV to check your balance, pay bills, or send copies of your bills to your phone.

The app features a few rows of icons–you wave your arm side to side to walk through them, and then bring your arms together to select. Best quote: “With our software, you could be on the couch at home, having a beer, all while dealing with your bank account and kicking back,” said Etronika’s CEO Kestutis Gardziulis. Now that’s my idea of a good time. Check out this video to see a demo:

It seems to work pretty well, although the ratio of effort to usefulness is an awful lot worse than, say, going to your bank’s website or using its mobile app. Shown off at the CTIA Enterprise & Applications event, the app, developed by Etronika, is still being shopped around to banks. Of course, a major stumbling block to the app’s being adopted is that Microsoft doesn’t allow third-party commercial apps for Kinect, at least not yet. But if nothing else it’s kind of an interesting example of the sorts of apps we’ll see if and when Microsoft eventually opens up an app store for the Kinect. It won’t all be fruit slicing, hand-drawn instruments, and bird flinging–you’ll be able to see your bank balance on your TV, too.