The wars in Iraq and Afghanistan are (ostensibly) winding down and military budgets are facing the axe on the home... 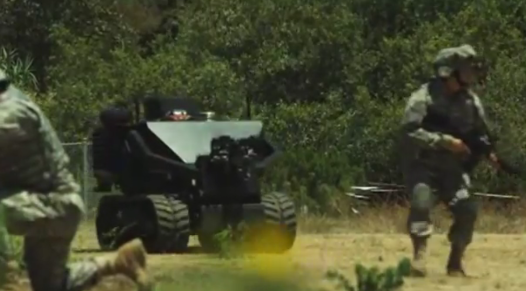 The wars in Iraq and Afghanistan are (ostensibly) winding down and military budgets are facing the axe on the home front, but that’s not stopping contractors from building bigger and badder combat-ready robots. Today in badass autonomous military hardware: Mesa Robotics’ Acer, a 4,500-pound mine-clearing, bulldozing, drone-launching, ordnance disposing, pack-muling mini-tank.

Acer is yet another attempt to provide U.S. armed forces with a multi-utility companion ‘bot that can be put to a variety of battlefield uses, like sweeping an area for buried IEDs, carrying gear, and poking around in suspicious areas so human lives don’t have to be put at risk. What sets it apart is its brains. Designed by a DARPA alum, Acer’s “behavior engine” imbues it with a relatively high degree of autonomy. It can follow troops on patrol autonomously, or sweep an area for buried explosive threats and safely detonate them all by itself, without bringing harm to troops or to the robot itself.

And perhaps that’s the big draw here. Acer’s main design parameter back when it was part of the Army’s now defunct Future Combat System initiative was to flail–that is, to employ a large rotating front-mounted drum that essentially slings chains into the dirt in front of the machine, which digs up and detonates buried explosives. It makes that look easy–you can see this about halfway through the video below, as Acer rolls through a minefield without missing a step as bombs detonate in its face–and that’s a nice capability to have in theaters where IEDs are the primary threat to troops.

Augment that with a variety of interchangeable tools for ordnance inspection and disposal and lane clearing, cargo space to carry extraneous gear, and even the ability to launch VTOL drones off its back, and it’s fair to say Acer is just what the Army needs. Or needed.

As Danger Room points out, the wars are ending and the Army is broke. Still, DR was able to get its hands on this video, which appears to be a final promotional push to get Acer into service before platforms like it are no longer considered integral for the Army’s upcoming mission profiles. And hey, what’s not to like about watching a two-ton-plus autonomous armored robot charging through a minefield?