A lopsided self-propelled micromotor could drive itself through blood vessels, making repairs or delivering drugs along the route, according to... 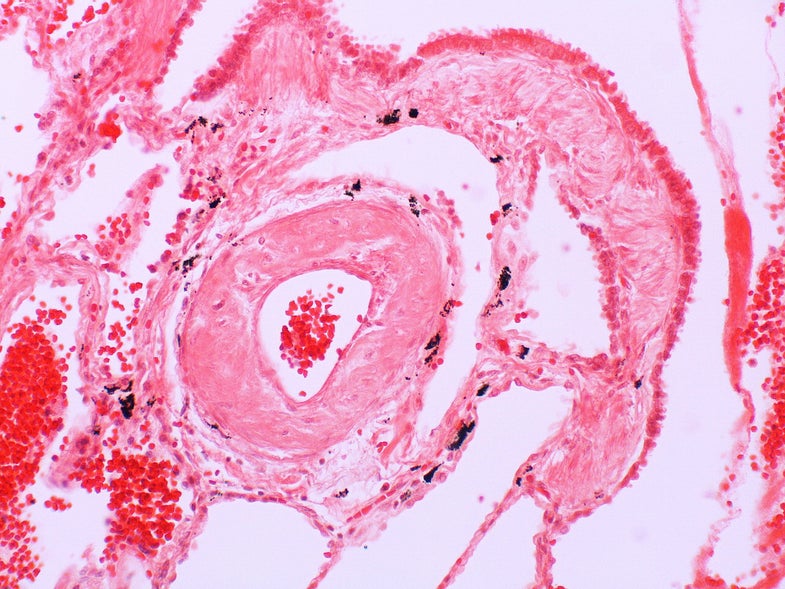 A lopsided self-propelled micromotor could drive itself through blood vessels, making repairs or delivering drugs along the route, according to researchers at Penn State. The small particles leach out a trail of material, like a microspider spinning a thread.

The motors turn on, as it were, when one side of a Janus microsphere grows a suite of molecules on one side. Eventually, the lopsided sphere creates an osmotic gradient. As fluid flows toward the area with fewer particles, the whole sphere moves.

Janus microspheres have two distinct hemispheres made of different substances. In this case, one half is gold and the other is silicon dioxide. Researchers led by Ayusman Sen at Penn State attached a molecule called a Grubbs catalyst, which induces polymerization, to the silica side. Then they added a monomer, which the catalyst strings into long chains. The monomer strings gather on the SiO2 side, which creates a mini current that sends the whole sphere moving the opposite direction.

To prove it can deliver substances, the scientists filled a gel substance with the monomer, which was slowly leached out. The micromotors moved toward the gel stream, like a single-celled organism following a trail of nutrient breadcrumbs.

This could be a handy, electricity-free way to send tiny devices into the bloodstream to do various tasks. The microspider motors could drive nanorobots that destroy tumor cells, or they could target drugs to specific organs more quickly, for instance.

The research is reported in the journal Angewandte Chemie.

Micromachines in the Bloodstream

The micromotors use a catalyst that binds asymmetrically to a Janus (two-sided) microsphere.