NASA Puts Its Money on Quantum Communications, Plasma Propulsion, and Other Future Tech 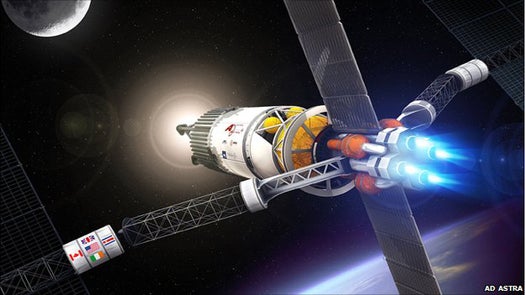 Each winning proposal will receive roughly $100,000 with which to bring their ideas closer–albeit only slightly closer–to reality. Many of the ideas, if developed fully, would cost well into the billions of dollars to develop (entanglement-assisted quantum communications systems for deep space missions don’t come cheap, even in this economy).

Hopefully by the time any of these projects matures (and NASA itself says the horizon for any of these proposals is ten years out) the agency will have a little more money to spend. Because–and this is the whole point of this exercise–NASA hopes these ideas will incubate and grow into technologies that will underpin the future of long-duration spaceflight as well as pay technological dividends elsewhere.

And who knows? We might just get that ambient plasma wave propulsion engine we’ve been waiting for. See the whole list of winning proposals here.