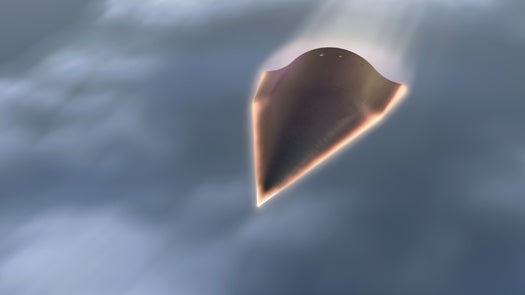 Last week, DARPA’s HTV-2 (Hypersonic Technology Vehicle 2) Falcon vehicle launched to near-orbital speeds aboard a Minotaur rocket before beginning what was designed to be a Mach 20 glide back to earth, demonstrating the kind of hypersonic capability needed to deliver a payload anywhere in the world in an hour. Then, a few minutes into its flight, HTV-2’s data transmitters went silent and so did the DARPA news stream feeding us the play-by-play.

Now we know what happened to HTV-2. Sort of.

HTV-2 separated from its Minotaur carrier rocket successfully and entered the descent phase of its flight with all systems looking nominal. But somewhere “post-perigee”–where it was supposed to start climbing again–HTV-2 encountered a flight anomaly that caused its autonomous systems to initiate a controlled termination of the flight. That is, the computer took over and crashed the hypersonic vehicle into the Pacific just as it was designed to do. Per DARPA director Regina Dugan via press release:

According to a preliminary review of the data collected prior to the anomaly encountered by the HTV-2 during its second test flight, HTV-2 demonstrated stable aerodynamically controlled Mach 20 hypersonic flight for approximately three minutes. It appears that the engineering changes put into place following the vehicle’s first flight test in April 2010 were effective. We do not yet know the cause of the anomaly for Flight 2.

While not ideal news, don’t miss the most important message there. HTV-2 achieved stable Mach 20 flight for about three minutes, gathering data all the way through. That’s 20 times the speed of sound. And though DARPA isn’t sure what the “anomaly” was, HTV-2 also demonstrated that its autonomous systems worked perfectly–at least according to DARPA. You can’t have a rogue hypersonic missile out there roaming the skies out of control. When something went awry, HTV-2 offed itself in the controlled manner prescribed by its engineers.

So it wasn’t a completely successful flight, but it was a successful crash. No word on where the program goes from here, but its unlikely DARPA is simply going to sit on that valuable hypersonic flight data. Expect something equally cool to be in the works in coming months.