The Panama Canal Gets an Update

Since 2008, the Panama Canal Authority has been leveling hillsides, excavating miles of new access channels to make room for the so-called post-Panamax ships. 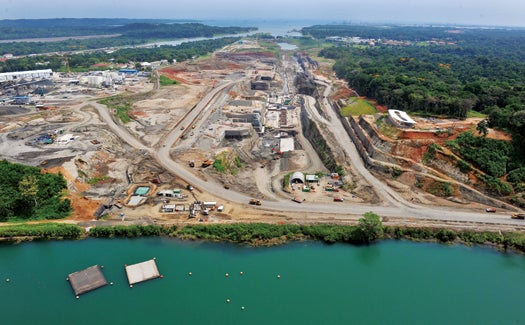 The century-old Panama Canal has a major shortcoming: New ships are too long, too deep and too wide to fit through it. by 2015, 40 percent of the world’s fleet will have outgrown the roughly 50-milelong passageway that is a key artery for goods headed from Asia to Europe and the U.S. Gulf and East coasts. Since 2008, the Panama Canal Authority has been leveling hillsides, excavating miles of new access channels to make room for the so-called post-Panamax ships. by the time the seven-year, $5.25-billion project is complete, it will have dredged a total of 5.3 billion cubic feet of dirt, sand and mud.

But the biggest bottlenecks are at each end of the canal, where locks lift and lower ships into and out of the channels. Instead of enlarging the current locks, the port authority will build two more sets—one at each end—large enough to fit ships that are 1,200 feet long and 160 feet wide and that can carry 12,000 containers (2.5 times more than the current capacity). With construction set to begin later this year, the new locks will increase the canal’s annual cargo capacity from 340 million to 600 million tons when they open in 2014.

The new locks will consist of three quarter-milelong, 60-foot deep chambers. A gate closes behind the ship, operators open a chute, and water rushes in. The water level raises 27 feet per chamber, and with it the ship. Gates then open to the next chamber. The old locks drew some 55 million gallons of water from an adjacent lake to raise the ship and then emptied it into the sea. In the new design, 60 percent of the water is recycled through three storage basins. The result is that even though the new locks are 30 percent bigger, they use 7 percent less freshwater per transit.