A new ultra-wideband antenna printed on paper or plastic can harvest ambient energy, enabling wireless sensors to tap into electromagnetic... 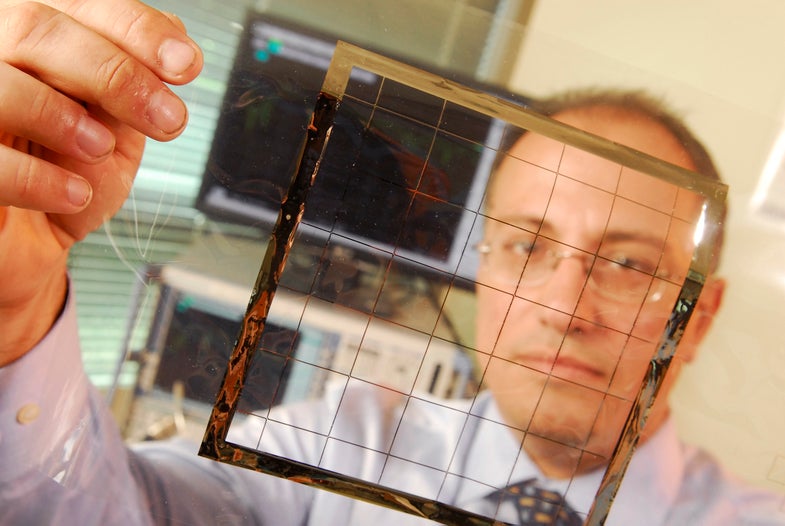 A new ultra-wideband antenna printed on paper or plastic can harvest ambient energy, enabling wireless sensors to tap into electromagnetic currents in the air around them. The device captures energy from a wide spectrum of frequencies, converts it to direct current, and stores it in capacitors or batteries.

Researchers at Georgia Tech scavenged sufficient microwatts to power a temperature sensor, using the ambient energy produced by a television station signal that was a third of a mile away.

More powerful systems that tap into multiple wireless bands could generate one milliwatt or more — enough to power small wireless sensors and microprocessors. Researchers hope that when it’s combined with advanced capacitor technology, the device could provide up to 50 milliwatts.

It’s not exactly the dream of wireless power envisioned by Nikola Tesla, who proposed vast tower networks transmitting electric fields. It’s more akin to siphoning juice from someone else’s battery. When the antenna receives a signal, the electromagnetic energy is converted from AC to DC.

“There is a large amount of electromagnetic energy all around us, but nobody has been able to tap into it,” Manos Tentzeris, a Georgia Tech electrical and computer engineering professor who is leading the research, said in a news release.

Tentzeris’ team has been using inkjet printers to print the devices on paper or plastic. An ink emulsion of silver nanoparticles are used to print radio-frequency sensors and circuits. The current prototype can scavenge power from frequencies ranging from FM radio to radar, from 100 megahertz (MHz) to 15 gigahertz (GHz) or higher, according to a Georgia Tech release.

In an upcoming experiment, Tentzeris’ team plans to activate a small microprocessor-based controller simply by holding it in the air. 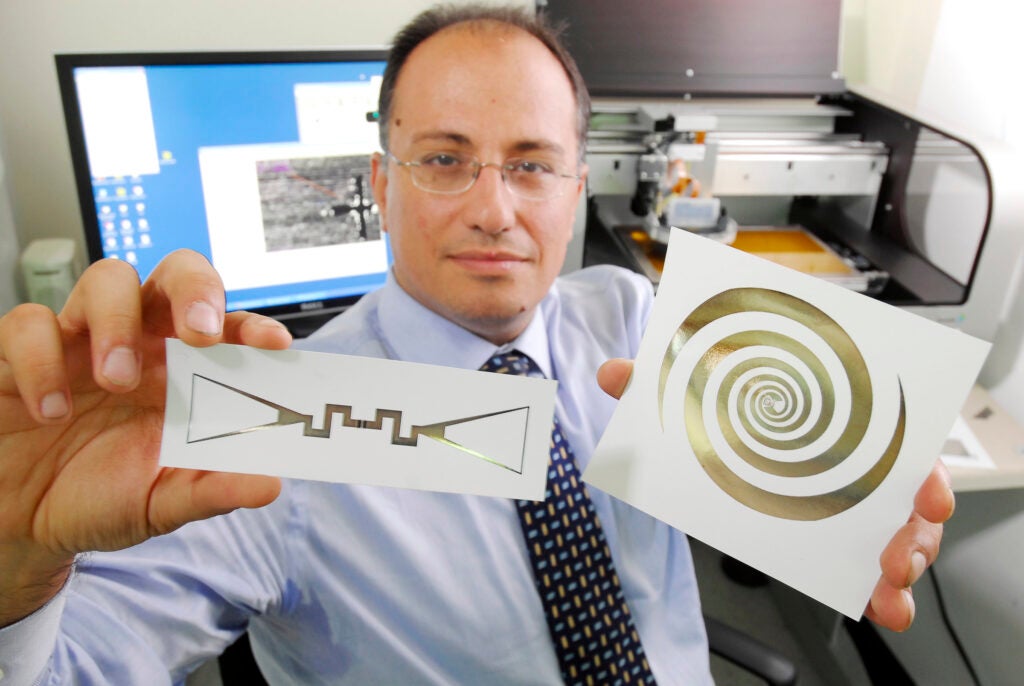 Tentzeris holds a sensor (left) and an ultra-broadband spiral antenna for wearable energy-scavenging applications. Both were printed on paper using inkjet technology.

The team believes these paper-based wireless scavengers, which are fairly cheap to make, will soon be widely available.

There are plenty of potential uses for them, from supplementary power generation for renewable sources to environmental sensors that scavenge energy from their surroundings. It could also serve as a backup power source, allowing an electronic device to emit a distress signal, according to the news release. They could be used to power RFID tags in anything from food to lumber; sniff for explosives or other chemicals at airports and other secure facilities; and even stress sensors on bridges and other infrastructure.

The researchers demonstrated the technology last week at an IEEE symposium in Spokane, Wash.