Hovering landers or drones look as though they’re suspended in the air, because you can’t see the vortices caused by... 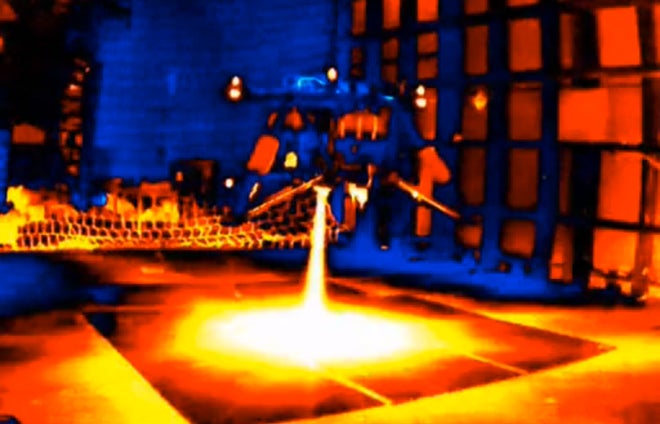 Hovering landers or drones look as though they’re suspended in the air, because you can’t see the vortices caused by the propellers or the heat emitted by the thruster, or whatever mechanism enables the hovering. Well, here you can. And it proves that the act of hovering is anything but delicate.

In a test earlier this month, this prototype NASA lander flew up to 7 feet for 27 seconds, proving it can execute commands autonomously, according to NASA. It was able to autonomously hover for an extended period, control its position and orientation and land successfully. NASA engineers were quite happy, as the video below shows.

It’s a pretty neat accomplishment, but it is made much cooler by the infrared view shown here. What seemed to be a gust of wind (knocking a NASA meatball poster off the test chamber wall) is rendered a huge jet of superheated gas.

NASA is testing this new robotic lander in a mission to design a new generation of small, versatile autonomous landers, which could conceivably alight on the moon or other airless bodies where a parachute would not be of use.

The next tests will take the lander up to 100 feet for a whole minute, according to NASA.