Video: Robot’s Supersonic Air Jets Allow it to Climb Just About Any Surface

Many wall-walking robots mimic natural adhesives–like the sticky feet of geckos–to remain fixed to a surface while they scale it.... 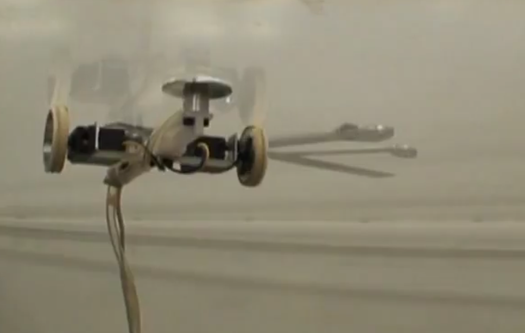 Many wall-walking robots mimic natural adhesives–like the sticky feet of geckos–to remain fixed to a surface while they scale it.

But this little bot uses nothing but a supersonic version of a well-known principle of fluid dynamics to cling to just about any surface–without the surface of its grippers ever actually touching it.

These kinds of grippers don’t generally create enough suction to hold up an entire robot, but a team of researchers at New Zealand’s University of Canterbury has built a supersonic Bernoulli gripper that is five times stronger than a conventional suction device–plenty strong enough to support the weight of a small ‘bot. So they built one, as you can see in the video below.

The wheels of the robot are clearly touching the various surfaces, but the grippers at either end are separated from the surface by a small gap. Each one forces air through a gripper with a uniquely designed geometry that forces air through a gap just 25 micrometers wide, accelerating it to Mach 3 (no joke). The result: serious suction.